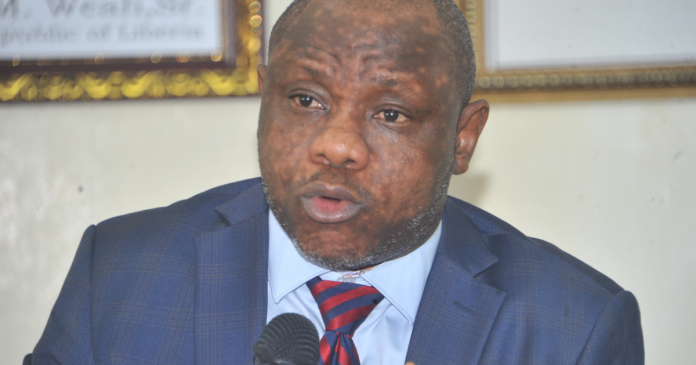 The Minister of Finance and Development Planning, Samuel D. Tweah Jr, has boasted that President George Manneh will win next year’s presidential election based on the success of his first six years in office, which is now in conclusion.

Tweah noted that come 2023, Weah will tell the Liberian people the story about how he inherited a broken economy that has now rebounded with growth expected to average more than 4 per cent.

“The President will be going for renewal in 2023 because he has done marvellously well. He’s going to be running on the successes he has had,” the Minister said while disclosing some of the President’s future campaign messages.

“In 2023 we know there will be propaganda, but we will run on our record. President will be making a case for six more years. We are in a political space, something can be good but someone tries to make it worse,” Tweah said at the closing of the official launch of the Fiscal Year 2023 Budget Preparation Process held yesterday. “However, we will have enough to convince the electorates that we are still the best option to continue with the development of this country.”

The President’s 2023 economic campaign message, Tweah noted, will be anchored on Weah saying this: “In 2018 I thought I was inheriting a strong economy but in reality, I inherited a broken economy and that I sank for two and a half years. But today, I rebounded and the economy is moving well. Now, economic growth is expected to be around 4.5 per cent.”

The US$785.5 million fiscal year budget for 2022 however has been recast to US$806.5 million, reflecting a net upward adjustment of US$20 million or 2.9 per cent over the originally approved budget.

According to Tweah, the government has done a lot, which calls for reelection. The Minister named the government’s continued fight against corruption and support for integrity institutions, as some of its success stories.

The Minister also cited the government funding of the ongoing Ganta to Saclepea road construction project, as well as many other infrastructure projects across the country and the free tuition policy at public universities as some of the government achievements.

The Ganta to Saclepea road project, which is in vote-rich Nimba, when completed, is expected to not just boost the economic development of rural Liberians, but quickly connect urban to rural areas.

The Ganta-Saclepea highway construction is the first ‘lot’ of the 118-kilometre road from Ganta to Zwedru – benefiting major urban areas like Saclapea and Tappita in Nimba County — the country’s second most populated county.

“President has already done so well that he deserves a national award. By the time the President leaves his first term, we will have successfully implemented free tuition, free WASCE, 2000 to 3000 health workers [would] have been put on the payroll and US$114 million is being used for all these programs. The former ruling UP had this money but could not execute one,” Tweah said.

Tweah noted that while people are criticizing the restated Act of the Liberia Anti-Corruption Agency, its former chair, Cllr. James Verdier had said he wished he had such a law legislated when he was in charge as head of LACC.

Verdier said he would have been happy to work with the new Act passed into law. He made the remark when he appeared on Spoon Talk, a popular online Talkshow.

Meanwhile, Tweah added that the next budget is going to be supported mainly by domestic revenue as the level of budget support will drop significantly and admitted that the global situation, including the war in Ukraine, is giving serious challenges to the government.

“The 2023 budget is going to be critical. This year, US$40 million is the budget support we are getting but next year we will be at US$15 million in budget support from partners. We might even fund our entire budget a hundred per cent based on the continuous improvements we will have in our revenue generation,” he told the audience.”

He stressed that health, education, and infrastructure development will continue to top the agenda of the government.

“There are lots of big wins coming for the government. The President goes to the Democracy conference in Washington, where only 17 African presidents were invited; we hope that we will pass at least twelve indicators on the MCC scorecard next year.”