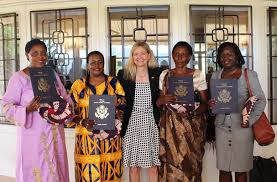 United States Ambassador to Rwanda, Erica J. Barks-Ruggles, yesterday honoured three Rwandan women during International Women’s Day celebrations at the US Embassy in Kigali.
The women were chosen from nominations submitted by US embassy 33,000 Facebook fans to receive the embassy’s 2016 ‘Rwandan Women of Courage’ award for their inspiring example of leadership and determination.
Joined by several 2015 winners, the recipients shared their success stories, as well as their ideas for creating opportunities for the next generation of women leaders.
“These women’s stories demonstrate the transformative impact one visionary woman can have on her entire community,” Amb. Barks-Ruggles said after the reception. “By serving as trailblazers and teachers, these ladies have not only become successful leaders in their fields; they have inspired countless young people to follow their own dreams.”
Since 2007, the US State Department in Washington, DC, has presented International Women of Courage awards each year to inspiring women from around the world who have demonstrated exceptional courage, strength, and leadership in advocating for human rights, social justice, and women’s equality and advancement.
This is the second year the US embassy in Kigali has presented awards to specifically recognise the inspiring women of Rwanda.
The three winners of the Embassy’s 2016 Women of Courage award include Agnes Twagiramaliya, a teacher in Nyamagabe District, who has dedicated herself to educating youth for 36 years.
Twagiramaliya was recognised by her students for her perseverance in encouraging learners to stay in school and work hard to reach their goals.
Also awarded was Zulfat Mukarubega, founder of the University of Tourism, Technology and Business Studies (former RTUC), who started out as a small-scale entrepreneur and went on to found the first tourism university in Rwanda.
The third recipient was Jeanne d’Arc Girubuntu, the only woman on Rwanda’s national cycling team.
Last year, Girubuntu became the first black African woman to compete at the World Championship in Richmond, VA, and in February 2016 she emerged second in the African Continental Championships Individual Time Trial.