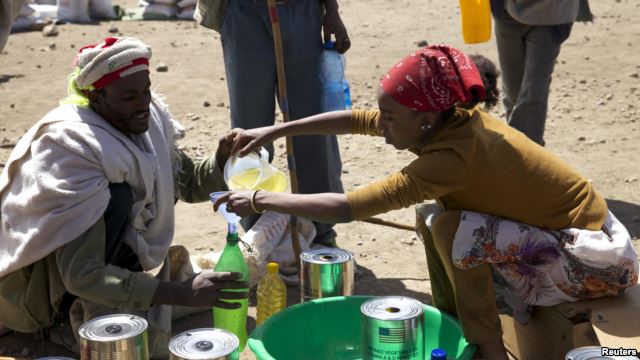 The United States is sending an elite team of disaster experts to respond to Ethiopia’s worst drought in 50 years, according to an official statement.
Around a dozen members of the U.S. Agency for International Development’s (USAID) Disaster Assistance Response Team (DART) have arrived in Ethiopia to coordinate the U.S. response to the drought.
They will be joined by DART logistics, nutrition, and water, sanitation and hygiene experts in the next few days.
USAID responds to around 65 disasters a year, including the recent Ebola outbreak in West Africa and last year’s Nepal earthquakes.
“With the announcement of the DART, we are acting to prevent a major humanitarian crisis and protect Ethiopia’s hard-earned development progress,” USAID’s administrator Gayle Smith said in a statement.
U.S. President Barack Obama visited Ethiopia, a close U.S. ally, on his 2015 trip to the continent of his father’s birth.
He has made food security a priority of his development agenda, saying in 2013 it was a “moral imperative” to end hunger on the world’s poorest continent.
Ethiopia’s government and the United Nations have asked for $1.4 billion to feed 10.2 million Ethiopians – the third largest appeal globally after Syria and Yemen.
An additional 7.9 million chronically food insecure people are receiving rations through the Ethiopian government’s Productive Safety Net Programme, supported by the United States and other donors.
Yet funding shortages mean food aid is in short supply and malnutrition will increase dramatically if donor money runs out in May, the United Nations has said.
“The worst impacts of this drought still lie ahead,” USAID said in a statement. “The scale and severity of this crisis is expected to far outstrip available resources.”
Ethiopia’s spring rains started in late February but many farmers do not have seeds.
USAID is providing almost $4 million of maize and wheat seeds for more than 200,000 families.
Ethiopia is one of the flagship countries for the U.S. government’s global hunger initiative, Feed the Future, which seeks to boost small farmers’ yields.
Some Feed the Future farmers are contributing maize to the disaster response, USAID said.
“It is imperative … to save lives and ensure that tens of millions of people aren’t pushed back into extreme poverty,” it said.