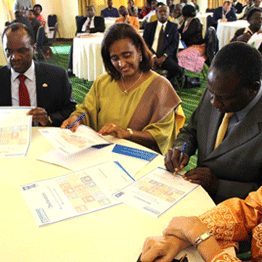 The private sector in Uganda has pledged to adopt the Gender Equality Seal Certification Programme for Public and Private Enterprises – a model pioneered by the United Nations Development Programme (UNDP), to help organisations create more equitable conditions for men and women at the workplace.

The pledge was made after Mr Patrick Bitature, the chairperson of the Private Sector Foundation Uganda (PSFU), and Ms Almaz Gebru, the UNDP country director, signed a declaration at a policy dialogue on Monday on the role of the private sector in delivering Agenda 2030 and the Sustainable Development Goals (SDGs).

The Minister of Finance, Mr Matia Kasaija, who witnessed the signing of the declaration, said the government was currently trying to ensure that there is gender balance in public office through a constitutional review.

When gender parity is achieved, workplaces in the private and public sector are better able to take part in supporting the realisation of Agenda 2030 and its 17 SDGs which were a key theme for the meeting and the second part of the declaration made by the Private sector.

“We were not part of the discussion on the Millennium Development Goals (MDGs) and this time, the private sector can no longer stand on the sidelines. It has to be a part of the SDGs,” Mr Gideon Badagawa, the executive director of PSFU, said.

He said the goals would enable them be part of the development process, especially since some were focused at building better economies through industry.

Ms Gebru said the SDGs are an opportunity for business people to take part in driving sustainable development.

“The private sector contributes the largest share of income and employment in Uganda. By adopting sustainable practices, the nascent private sector can show the way for the future while still optimising its competitiveness and profitability,” she said.

Mr Kasaija concurred with her, saying the solution to youth unemployment lies with the private sector since government can only offer a few jobs within the public sector.

“That is why as government, we recognise you, the private sector, as an important player in achieving both the SDGs and our Vision 2040,” he said.

According to statistics, more than 400,000 young Ugandans who enter the labour market each year, only about 113,000 are absorbed in formal employment.

While the national unemployment rate stands at 3.5 per cent, that of the youth is at 32.2 per cent and higher for degree holders at 36 per cent.