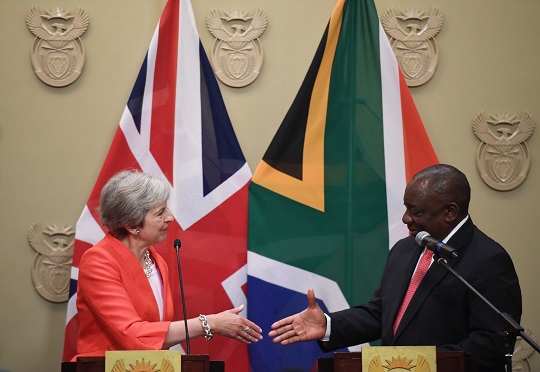 UK Prime Minister Theresa May and International Trade Minister George Hollingbery led a 29-strong business delegation on their visit to South Africa, Nigeria and Kenya this week to promote economic ties with Africa.

Africa is a young, vibrant and dynamic continent growing at an extraordinary rate. By 2050, 1 in 4 people on the planet will be African, a quarter of the world’s consumers.

This represents a transformational opportunity for UK firms to increase trade with African countries.

During the visit deals worth more than £300 million have been agreed within a variety of sectors, creating close to 3,000 jobs across Africa.
The commercial activity was announced this week as the Prime Minister set out the UK’s ambition to be the largest G7 investor in Africa by 2022, ahead of an Africa Investment Summit which will be held in the UK next year.

Prime Minister Theresa May said: “The deals being announced today demonstrate the already close trade and investment links between the UK and African countries, and the potential that exists for other UK businesses to make the most of the growing opportunities on the continent.

With a shared passion for entrepreneurship, technology and innovation, now is the time for UK companies to strengthen their partnerships with Africa to boost jobs and drive prosperity both at home and overseas.”

International Trade Minister George Hollingbery said:”I am delighted to have joined the Prime Minister on this visit showcasing the very best of the UK-Africa partnership and all that Global Britain has to offer in the region.Our trade and investment ties with South Africa, Kenya, Nigeria are already substantial. Trade between the UK and Africa was worth more than £31 billion last year, and the Prime Minister has made it the UK’s ambition to be the largest G7 investor in Africa by 2022. It is hugely positive to see these new deals signalling that our strong trading relationship is continuing to go from strength to strength.”

While in Kenya, the Prime Minister appointed Pauline Latham OBE, MP for Mid Derbyshire, as the Prime Minister’s Trade Envoy to Kenya. Pauline will work to build on the UK’s existing relationship with Kenya – maximising bilateral trade generating long-term benefits for both countries.

As part of the visit, the Prime Minister also announced that an agreement with the Southern African Customs Union and Mozambique means we will be ready to carry over the EU’s Economic Partnership Agreement as soon as the EU deal no longer applies to the UK.

This represents the most advanced statement of progress yet of around 40 existing EU trade agreements that the UK is rolling over.

She has also announced this week that UK Export Finance has increased its ability to support exports to a further 8 markets across Africa and made an extra £5.5 billion available to UK exporters and their African buyers to finance export deals, in a move to grow British exports to Africa, which exceeded £17 billion last year.

The UK-Africa trade relationship is already worth more than £31 billion.