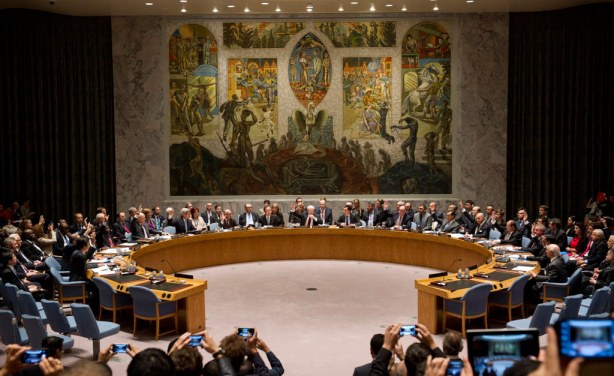 Members of the UN Security Council visited Mogadishu on Wednesday (August 13) on a visit to review progress made by the Federal Government and to demonstrate their continued support for the country’s efforts to ensure a sustainable peace.

Speaking at Mogadishu International Airport, Ambassador Mark Lyall Grant, Permanent Representative of the UK, which holds the Security Council Presidency this month, said the Council was “pleased to have this opportunity to visit Somalia.
Our visit underlines the commitment of the international community to Somalia’s progress toward peace and stability.” Ambassador Lyall Grant said the Council welcomed the recent political agreements to form interim regional administrations, including the establishment of the Interim Jubba Administration and agreements on the Interim South West State Administration and on the Central Regions.
He said that the Council also expressed its expectation that the Federal Government of Somalia will urgently establish a national independent electoral commission, lead a process to revise the constitution and hold a referendum on it by the end of 2015, and hold elections in 2016. Members also underlined the importance of women being represented at all levels of the political process in Somalia.”
The UN Security Council delegation which included representatives from Argentina, Australia, Chad, Chile, China, France, Jordan, Lithuania, Luxembourg, Nigeria, Republic of Korea, Russian Federation, Rwanda, UK and USA, met with President Hassan Sheikh Mohamud, Prime Minister Abdiweli Sheikh Ahmed, senior members of the Government and the Federal Parliament, and the leaders of the Interim Jubba Administration and Galmudug, Ahmed Islaan Madobe and Abdi Hassan Awale Qeybdid.
They also held discussions with UNSOM officials and with AMISOM. The Acting Special Representative of the Chairperson of the African Union Commission for Somalia, Ms. Mutende told the Council members that while significant gains had been made, AMISOM continued to face several challenges that affected its ability to implement its mandate.
It still didn’t have the necessary force enablers and force multipliers, and operated with only minimal maritime capability. She appealed for more logistical and technical support for both AMISOM and the Somali National Army. Ms. Mutende said AMISOM’s inability to deliver Quick Impact Projects in newly liberated areas left communities with little tangible peace dividends and emphasized the need to deploy more police. Overall, the pace at which other activities were being undertaken in newly recovered areas was too slow to sustain the security gains made, she said