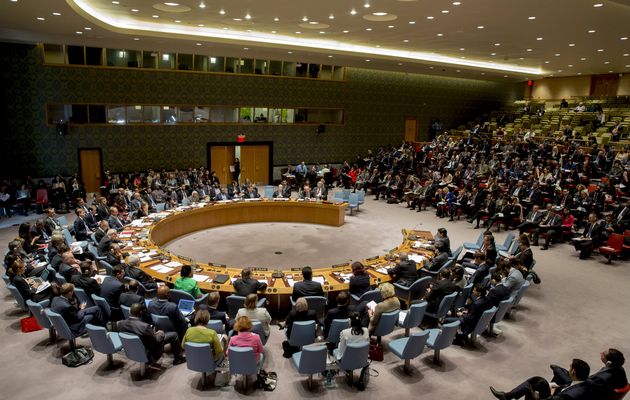 The UN Security Council will vote on a US-drafted resolution imposing a raft of new sanctions on North Korea following its nuclear test and rocket launch, US diplomats said.
The 15-member council will meet at 3:00 pm (2000 GMT) to decide on the package of measures that the United States says will impose the toughest sanctions yet on North Korea.
The United States presented the draft resolution to the council last week after reaching agreement with China, Pyongyang’s sole ally, on the new sanctions.
US Ambassador Samantha Power said that adoption of the resolution would send “an unambiguous and unyielding message to the DPRK regime: The world will not accept your proliferation. There will be consequences for your actions.”
She was using the acronym for North Korea’s formal name.
The measure “would break new ground and represent the strongest set of sanctions imposed by the Security Council in more than two decades,” Power said.
The council decided to impose new measures on North Korea after it carried out its fourth nuclear test on January 6 and test-fired a rocket on February 7.
Both tests were in violation of a series of resolutions barring North Korea from developing nuclear and ballistic missile programs.
The draft resolution would require countries to take the unprecedented step of inspecting all cargo to and from North Korea, impose new trade restrictions and bar vessels suspected of carrying illegal goods for North Korea from ports.
The measure provides for a ban on exports of coal, iron and iron ore from North Korea, except if that revenue is used for “livelihood purposes” and not to fund Pyongyang’s nuclear and ballistic missile programs.
The draft resolution would also ban sales of gold, titanium and rare earth minerals from North Korea and would prohibit the supply of aviation fuel including rocket fuel to the reclusive country.
Banking restrictions would be tightened and governments would be required to ban flights of any plane suspected of carrying contraband destined for North Korea.
The draft resolution adds 17 individuals and 12 entities to the UN sanctions blacklist including North Korea’s NADA space agency and its intelligence agency, the Reconnaissance General Bureau.
The United States, France and Britain had pushed for quick adoption of the draft text, but Russia said it needed time to analyse its content.
The council has imposed four sets of sanctions on North Korea since it first tested an atomic device in 2006.