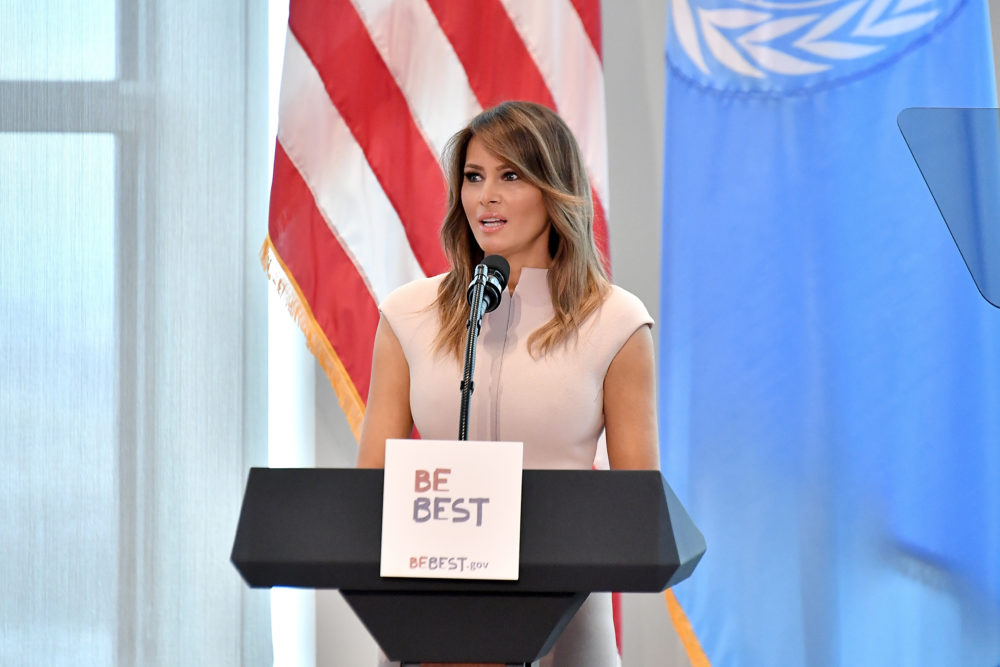 The first lady discussed her plans Wednesday at a reception for the spouses of foreign leaders and others participating in the annual U.N. General Assembly.

“Oct. 1 will mark the first day of my solo visit to four beautiful and very different countries in Africa,” Mrs. Trump said during brief remarks to several dozen guests in a reception room in a building near U.N. headquarters.

She said she looks forward to spreading the message of her “Be Best” child-welfare initiative throughout Africa. She launched the campaign earlier this year to focus on overall child well-being, with an emphasis on opioid addiction and online behavior.

The countries on her itinerary have worked closely with the U.S. Agency for International Development, which is helping organize the trip.

“Whether it is education, drug addiction, hunger, online safety or bullying, poverty or disease, it is too often children who are hit first, and hardest, across the globe,” Mrs. Trump said. “Each of us hails from a country with its own unique challenges, but I know in my heart we are united by our commitment to raising the next generation to be happy, healthy and morally responsible adults.”

She offered no details on her activities in each country, and did not say when she would be returning to Washington.

The first ladies of Ghana, Malawi and Kenya attended the event and Mrs. Trump recognized each one individually. The first lady of Kenya accompanied her husband, President Uhuru Kenyatta, to the White House in August, and she and Mrs. Trump were able to meet separately from their spouses.

Mrs. Trump will travel next month without President Donald Trump, who raised ire across Africa this year after his private complaint about the continent’s “s-hole countries” was leaked to journalists. He said earlier Wednesday that he and his wife “love Africa.”

Trump later offered a partial denial in public but privately defended his remarks, The Associated Press reported in January. Trump also didn’t deny the comment when he was asked about it while hosting Nigerian President Muhammadu Buhari at the White House in April.

While the first lady tours the vast African continent, the president is expected to be in the midst of aggressive campaigning for November elections in which his Republican Party’s control of both houses of Congress is at stake.

The first lady’s only other solo international foray was a September 2017 day trip to Toronto to join Britain’s Prince Harry at an athletic competition he founded for wounded service members and veterans, a constituency both the president and Mrs. Trump say they value.

She has accompanied the president to Saudi Arabia, Israel, Turkey, Brussels, France, Japan, South Korea, the United Kingdom and Finland for a July summit with Russian President Vladimir Putin. She did not travel with him to Singapore in June for a similar meeting with North Korean leader Kim Jong Un due to medical restrictions on her travel following kidney surgery in mid-May.