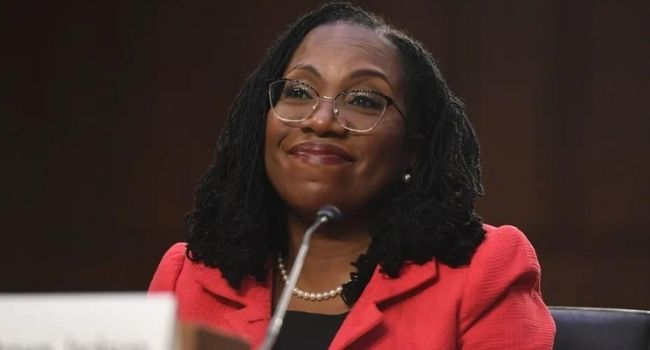 The United States Senate on Thursday confirmed Ketanji Brown Jackson as the first Black woman ever to serve on the Supreme Court.

The 51-year-old’s appointment means white men will not be the majority on the nation’s high court for the first time in 233 years.

President Joe Biden called it a “historic moment for our nation.”

“This milestone should have happened generations ago… but we are always trotting on a path towards a perfect union. Nevertheless, America today is taking a giant step towards making our union more perfect,” Democratic Senate Majority Leader Chuck Schumer said.

“People sometimes talk about standing on the shoulders of giants; well, Judge Jackson will go down in history as an American giant upon whose shoulders others will stand tall. And our democracy will be better off for it.”

Jackson picked up support from three Senate Republicans during a gruelling and brutal confirmation process, delivering Biden a bipartisan 53-47 approval for his first Supreme Court nominee.

It is a huge moment for the president, who chaired the Senate Judiciary Committee in the 1980s and 90s, meaning he has the unprecedented distinction of naming and overseeing a Supreme Court justice appointment.

Crucially, it has allowed Biden to show the Black voters who rescued his floundering 2020 primary campaign that he can deliver for them following the recent defeat of voting rights legislation.

At 42 days, the confirmation will be among the shortest in history, although longer than it took to seat Donald Trump’s last court pick during his presidency, Amy Coney Barrett.