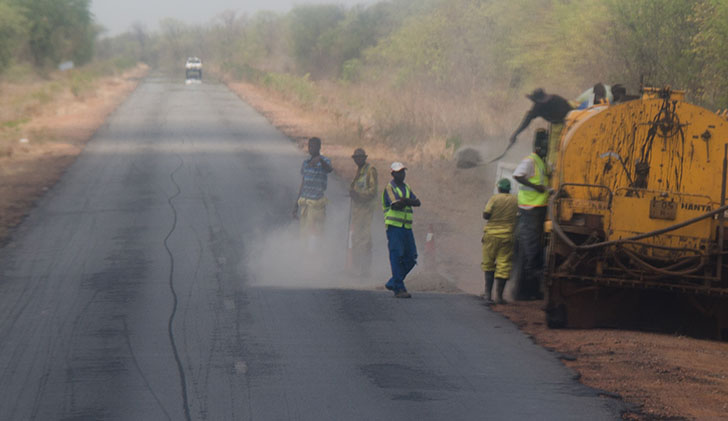 ZIMBABWE has averted potential loss of millions of United States dollars in annual revenue earnings stemming from its continued failure to maintain and upgrade its road infrastructure, amid revelations that South Africa and other Southern African Development Community (SADC) countries were planning a new road network to bypass the country largely because of the bad state of the Beitbridge-Harare-Chirundu Road.

After years of dilly-dallying and massive loss of lives, Harare has finally awarded the contract for the construction of the road.

Austria’s Geiger International, in association with China Habour Engineering Company Limited (CHEC), has been awarded the US$2 billion project, with work expected to commence soon. Zimbabwe will repay the loan over 25 years, paying US$80 per annum.

Transport minister Joram Gumbo confirmed the deal, which was reportedly approved by Cabinet.

A team from CHEC was already in Zimbabwe, while Geiger International officials were expected this week.

“The teams from Geiger International and CHEC shall meet with a Government inter-ministerial negotiating team to look into the finer details of this project, which include the conducting of due diligence exercises on the companies to assess their ability financially and technically to undertake the project,” he said.

Minister Gumbo said the implementation of the project took long as due processes on the evaluation of international companies that had submitted their bids were being done.

Work on one of Zimbabwe’s busiest roads – carrying between 1000 and 1500 vehicles a day – stalled in 2013 after the initial winner of the contract, Zim-Highways, took government to court over breach of contract.

The court case was however withdrawn, leading to the floating of the tender and Geiger winning the bid on a second bite of the cherry. However, the global defence contractor and manufacturer faces a daunting task in raising the required US$2 billion to refurbish the 585km single lane road into a dual carriageway.

As it is, Geiger is reportedly seeking to leverage on its China links especially Shanghai for the construction of Zimbabwe’s bumpy and major artery that had rapidly deteriorated due to heavy vehicular traffic.

Zimbabwe is the artery and hub of Sadc’s road transport network, linking southern Africa with the rest of Africa.

SADC neighbours, including South Africa, had made plans for a road network that by-passed Zimbabwe stretching through Kazungula, Gumbo said.  President Robert Mugabe added his voice to the growing clamour by ordering the immediate upgrading of the killer Beitbridge-Masvingo-Chirundu road.

In spite of a huge public outcry over the continued loss of lives along the road, in particular during public holidays and also on the backcloth of the massive development of the Plumtree-Bulawayo-Harare-Mutare road, the project remained stalled over the past three years.

The dualisation of the road stalled after Zim-Highways, fronted by construction giant Costain Africa and which also included Murray & Roberts, Tarcon Civil Construction and Mining Group, BancABC and Joina Development, went to court following a decision by government to cancel the MoU that had given the consortium right to embark on the project over a decade ago.

Zim-Highways reportedly struggled to get funding for the multi-million dollar project, apparently because government declined at the time to sign a guarantee that had been demanded by the Development Bank of South Africa.

“Of course, government is worried about the continued loss of lives and this is unnecessarily so. That is why President Mugabe has given us a mandate to begin work on the rehabilitation of the road to correct the situation,” Gumbo said.

The Beitbridge-Harare-Chirundu facilitates the movement of millions of people between Southern Africa and central, east and north Africa while also facilitating regional trade.

The country has, however, failed to repair and upgrade its roads which date back to the Rhodesian era. A 2001 sadc assessment of the road infrastructure in the region showed that a third of Zimbabwe’s road network was in a parlous state. The Beitbridge-Chirundu Road was singled out as one of the roads that needed rehabilitation because of its importance in the region.

The SADC move to bypass the country had, however, jolted the government into action.

“The project is not far away as we have been given the go-ahead by His Excellency (President Robert Mugabe) to conclude discussions with a certain company. What is left is to sign the MOU with this company whose identity I cannot disclose for now. We are proposing to have eight segments in the construction process and this project will create 300 000 jobs,” Gumbo said.

In 2013, the Development Bank of Southern Africa, which funded the construction of the Plumtree-Bulawayo-Harare-Mutare highway, was willing to release about US$1.1 billion for the upgrading of the Beitbridge-Chirundu Road, given its strategic importance, but the Zimbabwean government was not willing to award the tender to Group Five. Group Five are undertaking construction of the Plumtree-Bulawayo-Harare-Mutare highway.

A report compiled after DBSA’s Integrated Investment Proposals Corporate Credit committee meeting held on October 13, 2010 shows that the bank felt Zimbabwe’s roads should be given priority as they would benefit the whole region.

“Given Zimbabwe’s strategic geographic positioning, the proposed roads rehabilitation programme provides for linkages with Sadc trade corridors, an initiative which addresses the DBSA’s regional integration objectives and provides for immense growth opportunities given that Zimbabwe has the ability to service the needs of over 400 million people in the region,” it says.

DBSA said key factors why a sound Zimbabwean road infrastructure was vital include that the landlocked country is strategically positioned as a gateway between Southern Africa and the rest of Africa. DBSA also considered Zimbabwe has significant imports and exports.

“Such factors render its roads network of critical importance to both itself as well as the Southern African region at large,” said DBSA.