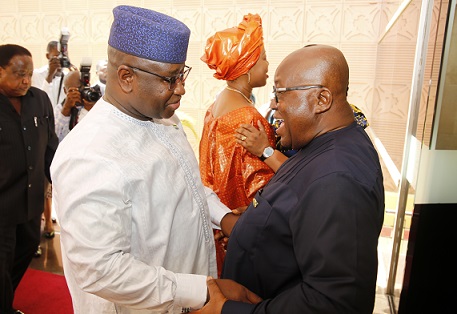 The President of Sierra Leone, Mr. Julius Maada Bio, yesterday began a two-day state visit to Ghana, saying he had been encouraged by Ghana’s free senior high school (SHS) programme to adopt a similar policy for the people of Sierra Leone.

He said although implementing a free SHS policy was not a mean task, the government and the people of Sierra Leone were determined to take the initiative because education and human resource were crucial for the development of the country.

He said he also learnt lessons from Ghana’s efforts at fighting corruption and skills training.

President Bio made these remarks when he and President Addo Dankwa Akufo-Addo jointly addressed the Presidential Press Corps at the Jubilee House yesterday after the two leaders had held bilateral talks to discuss issues of mutual benefit, ranging from education to health, energy, agriculture and trade.

After the press conference, a state banquet was held in honor of the visiting President.

Addressing the press conference, Mr. Bio stated that Sierra Leone was a country in need and wanted to learn from Ghana to be able to catch up with the rest of the world.

He said he was in Ghana not only to deepen traditional ties but also look for other areas of mutual benefit.

President Bio commended Ghana for supporting Sierra Leone during its elections through ECOWAS and the special support from Ghana when the country found itself affected by the Ebola virus, war and mudslide.

President Akufo-Addo urged his visiting counterpart to be resolute in implementing free SHS education because that held the key to providing the people with skills and knowledge for them to contribute their quota to national development.

Having followed, with keen interest, the structural programme being embarked upon by President Bio’s administration, President Akufo-Addo said, he was particularly happy about his free quality education initiative.

“I urge you to stand firm and see it through, regardless of the opposition you will face. For us in Ghana, our free senior high school education policy, within the first two years of its implementation, has ensured that 270,000 more students whose education would otherwise have been truncated for financial reasons have access to secondary education,” the President added.

President Akufo-Addo also assured President Bio that in the spirit of the excellent relations between the two countries, such assistance, as within Ghana’s modest means, to support the education, health, sanitation and other initiatives of President Bio’s government would be forthcoming.

“It is my sincere desire that we set the tone for Ghana and Sierra Leone to search continually for ways to co-operate, irrespective of who is at the helm of affairs in our respective countries.

“I have no doubt, however, that together, the two of us can forge a new, strong partnership for cooperation between our two nations for the mutual benefit of our two peoples,” the President said.

He also urged President Bio to work hand in hand with Ghana on the process of UN Reform, especially of the UN Security Council, as set out in Africa’s Common Position on UN Reform, based on the Ezulwini Consensus.