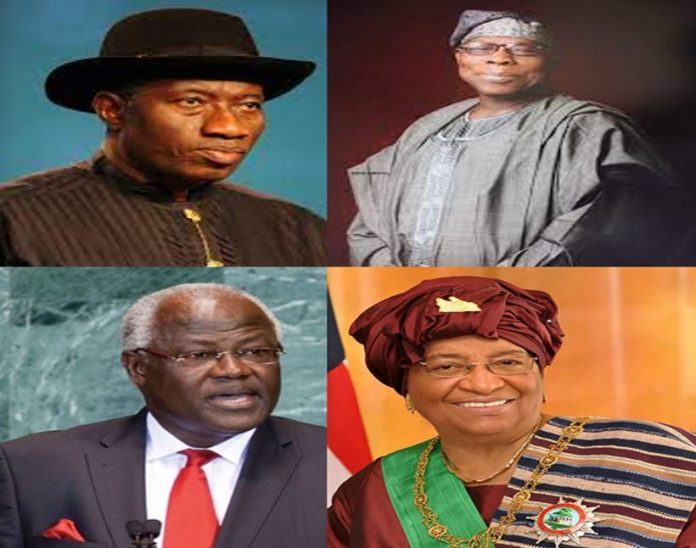 Former West African leaders under the auspices of the West African Elders Forum (WAEF), have called on political leaders in Africa to address security challenges in their countries and strengthen democratic institutions to enhance good governance and economic development in the sub-region.

The leaders who spoke at a strategy meeting held in Abuja on Wednesday stated that for democracy to endure it must yield basic public goods to its citizens.

They spoke at the formal inauguration of the West African Elders Forum, an initiative of the Goodluck Jonathan Foundation (GJF) with support from OSIWA, which seeks to limit electoral violence and promote democratic stability in West Africa. The Forum has former presidents in the sub-region as members.

Former President Jonathan who is the Chairman of GJF described the West African Elders Forum as an initiative aimed at leveraging the rich resources of eminent personalities in West Africa to promote peace and support processes that enhance sustainable democracy.

He stated that the vision “is to harness the experience and wisdom of our region’s eminent leaders to advance the course of political stability and the quest for economic progress and prosperity in our countries.”

The leaders thanked former President Jonathan for initiating the Forum and promised to lend their support to its engagements and programmes.

Speaking in support of the initiative former President Obasanjo noted that the leaders need to work individually and collectively “to deal with post-pandemic development like governance to build an inclusive society within our respective societies in West Africa.”

Similarly, former President Sirleaf said: “Many of us have been involved in mediations and interventions either as individuals or sometimes as part of institutional arrangements to achieve the objective of good governance, peace and security. But we have lacked a collective African effort and this is what this group will bring.”

In his own intervention, former Head of State Abdulsalami Abubakar observed a pattern of rising insecurity not only in our sub-region but the world over. “We have seen the efforts of ECOWAS in establishing democracy in the subregion. I am happy that President Goodluck Jonathan has deemed it fit to establish this forum of eminent personalities to alleviate the problems we encounter in establishing democracy and also in fighting insecurity.”

Also speaking, former Sierra Leonean President Ernest Bai Koroma said: “The more progress we have made, the more challenges we are experiencing,   even in the areas of governance. That is why I believe an initiative like this is very timely because of the trend that we are experiencing in elections and post-elections.”

Speaking further, former President Jonathan said: “It is evident that as former heads of state, we have not relented in our individual efforts in maintaining stability in Africa and expanding the democratic space. We have worked towards fostering free and fair elections as well as the peaceful transfer of power from one administration to another.

“But with this Forum, we can collectively work as a team to reduce political violence and electoral conflicts in West Africa.  This is consistent with the goal of the Goodluck Jonathan Foundation to support democratic transitions and manage political emergencies within the continent.

The former President noted that over the last few decades, the West African region has demonstrated leadership and political will by setting the pace in transforming a regional group of states into a ‘secured community’ on the continent.

“Regrettably, the peace and stability of the region is being eroded because of many reasons including political contestation for power, the spread of terrorism and the negative effects of the Covid 19 pandemic.

“We recognize the efforts of the United Nations Office for West Africa, the African Union, ECOWAS, the various states and other development partners aimed at promoting peace and stability in this region.

“With this Forum we are to collectively exert our goodwill towards preserving the peace in our nations, some of them fragile, and prevent them from descending into anarchy.  It is my hope that through the Forum, we will be able to leverage your collective knowledge, years of experience, passion and deep understanding of the issues to contribute to ongoing efforts towards limiting violence and instability and protecting the integrity of democratic processes within the region.

“As Elders, we will encourage current leaders to embrace the concept of democracy. That leaving behind a lasting legacy of people-oriented leadership that positively impacts the lives of ordinary citizens is crucial.

“We have played and are currently playing key roles in promoting peace and stability within the region. We are all united by our common passion and commitment to see the region progress.”