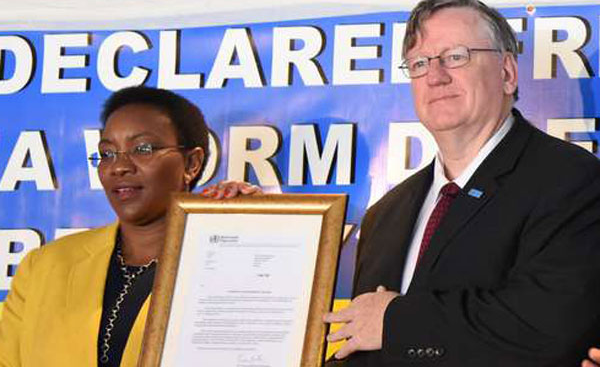 Kenya has been certified free from Guinea worm by World Health Organization who commended the government for their efforts to fight the disease.

The Health Cabinet Secretary, Sicily Kariuki who received the certification on behalf of her country termed the award “a validation of Kenya’s Guinea Worm eradication efforts”.

Ms. Sicily received the certificate from the UN agency recently at Panafric Hotel in Nairobi.

“The certification of the second disease to be successfully eliminated in Kenya after Small Pox indeed validates our valiant efforts,” she said, adding that the country is determined to eradicate more diseases.

“While celebrating our success, we need to collectively anticipate and manage the continuous threat of re-emergence of eradicated diseases.

“The continued threat of importation of Guinea Worm cases from South Sudan and Ethiopia and the need to ensure that our surveillance is robust enough to detect and contain cases promptly, whenever and wherever they may occur, remains a priority on our healthcare agenda,” she said.

During the end of 2017, a team from the International Commission for the Certification of Guinea Worm Eradication confirmed that the disease no longer exists within the country’s national borders.

“Beyond Guinea Worm, Kenya is on the path towards more successes on the disease eradication front.

“The country is well-placed to eliminate maternal and neonatal tetanus this year.

“In the late 1980s, tetanus used to kill about seven out of every 1,000 children but that rate is now down to less than one per every 1,000 children, a reduction of more than 90 per cent,” she said, adding that the country is targeting eliminating mother-to-child transmission of HIV and congenital or inherited syphilis by 2021.

“Early signs of the eradication of the (inherited HIV condition) are already emerging with some health facilities reporting zero mother-to-child transmission of HIV over the past year,” Ms Kariuki noted.

“As a country, we are also working on the elimination of elephantiasis by 2020 and trachoma by 2019. Elephantiasis, the treatable parasitic infection which is transmitted through mosquitoes, ought to be eliminated through mass treatment with appropriate antibiotics,” she added.

Other diseases targeted are cervical cancer and Hepatitis C.