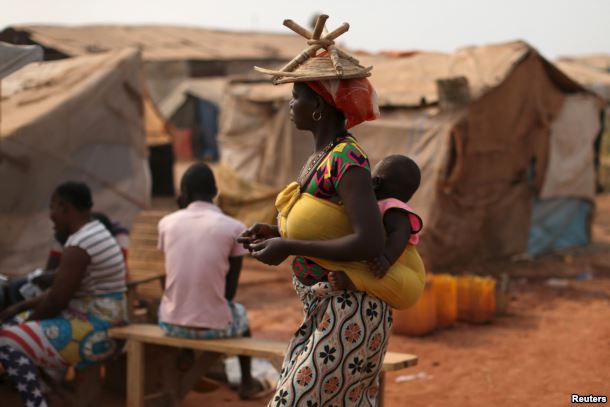 The president of the Central African Republic announced last week he intends to close the camp for internally displaced people (IDP) in the capital’s international airport. The government would like to send the estimated 28,000 displaced Bangui residents “home for Christmas.”

Philippe Guianandji has lived at the M’poko camp for nearly three years. He and his family fled here during the fighting between Muslim and Christian militias in 2013. French soldiers and U.N. peacekeepers at the airport kept the camp secure.

Guianandji says he’s not too concerned about leaving, but says others are worried, even terrified about trying to reclaim their former lives.

“For me, the burden is not heavy because I’m working. But I’m pleading for the people here because they don’t have work. You can see the cassava leaves. This is their food. Even though I work I will face some challenges, but not as bad as them,” Guianandji said.

While Guianandji and his family will be able to afford rent, others in the camp have no money to spend on housing.

“We don’t know yet the amount that the government promised, but we worry it will not be enough,” said Christine Dnambe, an IDP who has lived in the camp for the past two years.

At a recent ceremony, the government handed out “return kits” to about 30 families, which included money for relocation.

Dnambe said she was happy to see the president visit because “it shows that we’re going to have peace.” However, she doesn’t have enough money to pay rent.

And, housing costs are rising.

A 20-minute walk from the camp, Leocadie Guiando can visit her old neighborhood, but she can’t afford to live here.During the conflict, militias destroyed her house and her husband later died.

“I don’t have any financial help,” she said.“I want to leave the camp because we are living there like animals. We lie on the ground.We don’t have any beds. There are many illnesses there in the camp.”

In her old neighbourhood, the houses aren’t ornate, but they’re well-built and provide much more comfort than life in a tent. It is markedly cooler in the neighbourhood with trees limiting the rays of the harsh sun.

The government stresses it will respect the IDPs’ dignity and human rights as it closes the camp, but it’s unclear even to the government how much support the camp residents will get.

“We just start this program with the small money that we have,” says Antoine George Maximillian Mbanga, the Cabinet director of the Ministry of Social Affairs and Reconciliation. “But we have the word of the international community that once the refugees are relocated, once they go back to their neighbourhoods, they are going to have support that will give them the possibility to have not only their homes but also basic community support.”

The international organizations working at the camp also stress the relocation must be done humanely.

“But we have to also acknowledge that having these people right by the runway, it’s a huge danger that nobody will accept,” said Kouassi Lazare Etien, the representative for the U.N. refugee agency.

Etien said getting the IDPs “home for Christmas” is unrealistic.

“I don’t think that both the humanitarian and the government joining forces will have the capacity to drive out of the site all the people all at once. No, it is something that will go at some pace until the site is empty,” he said.