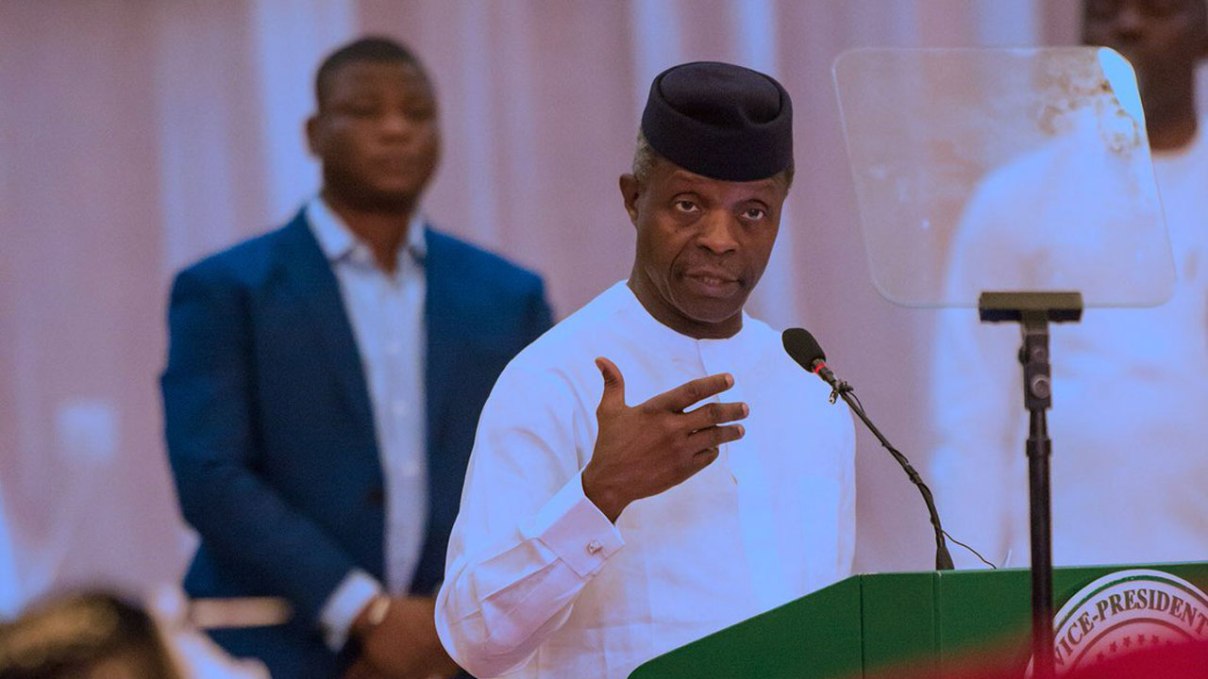 For robust growth, the Nigerian economy has to be private sector driven, Acting-President Yemi Osinbajo has said.

Mr Osinbajo made the statement on Friday in Lagos while on a facility tour of LADOL shipyard, which houses the Egina Floating Production Storage and Offloading (FPSO) installation, the first fully fabricated and integrated FPSO in the country.

Mr Osinbajo said it was impossible for government alone to meet the needs for economic growth or drive industralisation. He added that Nigeria has to borrow a leaf from the developed world whose economy is largely driven by the private sector.

“The Nigerian economy has to be private sector led, this project is an example. A $16 billion project, in naira terms that is around N5 trillion, the entire Nigerian budget is N9 trillion which is the highest in history of Nigeria, spending on infrastructure is N1.5 trillion naira and it tells you that a single project is more than the entire Nigerian budget for infrastructure excluding state budgets and this is the story of developed economies of the world,” Mr Osinbajo said.

“There is no way that government can satisfy the push for economic growth. So, for us it is fundamental that the private sector must lead,” he added.

In order to position the private sector to take up that leadership role, the official said the government has signed two executive orders to promote the ease of doing business in the country.

“The president has signed so far two executive orders on the issue of local content. I think this facility and partners have shown that this is available and there is no question whether talent is available in Nigeria because evidence of that is on display here.

“Part of our commitment to ease of doing business is tackling corruption that attends all of these activities. We have been able to check ground corruption where you just go to the treasury and take money, it is no longer possible.

“This country can only work if we are able to deal with corruption, we have the talent and everything we need to make this country work. Because you will find out that it is possible for this type of project to be held up for years because someone wants to be settled,” he said.

Mr Osinbajo added that projects such as LADOL’s were only made possible because the government decided to break the monopoly in the oil and gas sector, which he argued, impedes growth.

“It is very clear that monopolies restrict growth but everyone wants a monopoly so it is always a struggle between the regulators and the monopolies and every argument is made on why each monopoly should remain and that is why federal policies have been on not committing to monopolies but to open up the space so that there would be competition.

“It’s very obvious now from what the MD of Shell said that breaking up monopolies is an important part of encouraging investment and making the environment more conducive for those doing business.

“I believe some of our private partners need to recount some of the benefits they have derived from government policies like Shell did because if he didn’t say we wouldn’t have known how much a decision not to allow monopoly has helped,” he said.

Buttressing the comment of the Acting President, the Managing Director of the Nigerian Ports Authority, Hadiza Bala-Usman, said the success of the project is reflection of the results of the government’s policies on the ease of doing business and dismantling monopoly.

“The goodwill of the Federal government in liberalising monopoly an implication of which means project of this choice can be located in any location of the investors choosing, hitherto parties were mandated to locate such activities in certain ports and location.

“The project is a testament to the federal government’s stance on maritime and a show that industrialisation is real and that local companies are able to thrive and support international investment projects,” she said.

The CEO of LADOL, Ladi Jadesimi said the project wouldn’t have been successful if the government had not liberalised the that sector.

“When we started the project, we didn’t know how hard it will be and how long it will take, the challenges we faced surpassed our imagination but fortunately we were able to overcome them. Nothing threatened our investment more than monopoly until recently when the stranglehold of monopoly on the sector was broken. This administration has ushered in a new era by giving us such environment.

“We also need to give thanks to the Nigerian content monitoring board in making sure of the integration of the FPSO in Nigeria. Every country that has industrialised has only done that through indigenous investment.

Speaking also at the tour of the facility, the deputy managing director TOTAL E&P Nigeria Ltd Ahmadu-Kida Miss said: “Total has invested about $10 billion in the last five years in the Nigerian economy. Egina is the largest investment project going on in Nigeria, the project is expected to be completed at the end of this year and in size, it is three times the football pitch for the World Cup in Russia.”

He also said that the FPSO “is designed in such a way that there is zero flaring and the principle will be maintained all through the 25 years of the FPSO service”.

The Managing Director of Shell Nigeria Exploration and Production Company, Bayo Ojulari, said the company has managed to save 40 per cent of its operational cost by moving from Onne to Lagos among other cost cutting measures.

“We have reduced the number of vessels we use by 50 cent, we are saving the fuel we burn by 50 per cent, and we save 50 per cent on our staff in terms of exposure on waterways and security. And what that means is that with Bonga in the South-west, we have been able to take over $1 billion out of the cost of operation meaning the project is now better than we have it before.”

He also said in addition to the Bonga FPSO the first deep water challenge in Nigeria which has currently exceeded its projected production in shorter years, “Shell Nigeria is looking forward to adding more FPSO’s and with the completion of the EGINA FPSO, it looks forward to more than occasional maintenance of the Bonga FPSO with LADOL”.