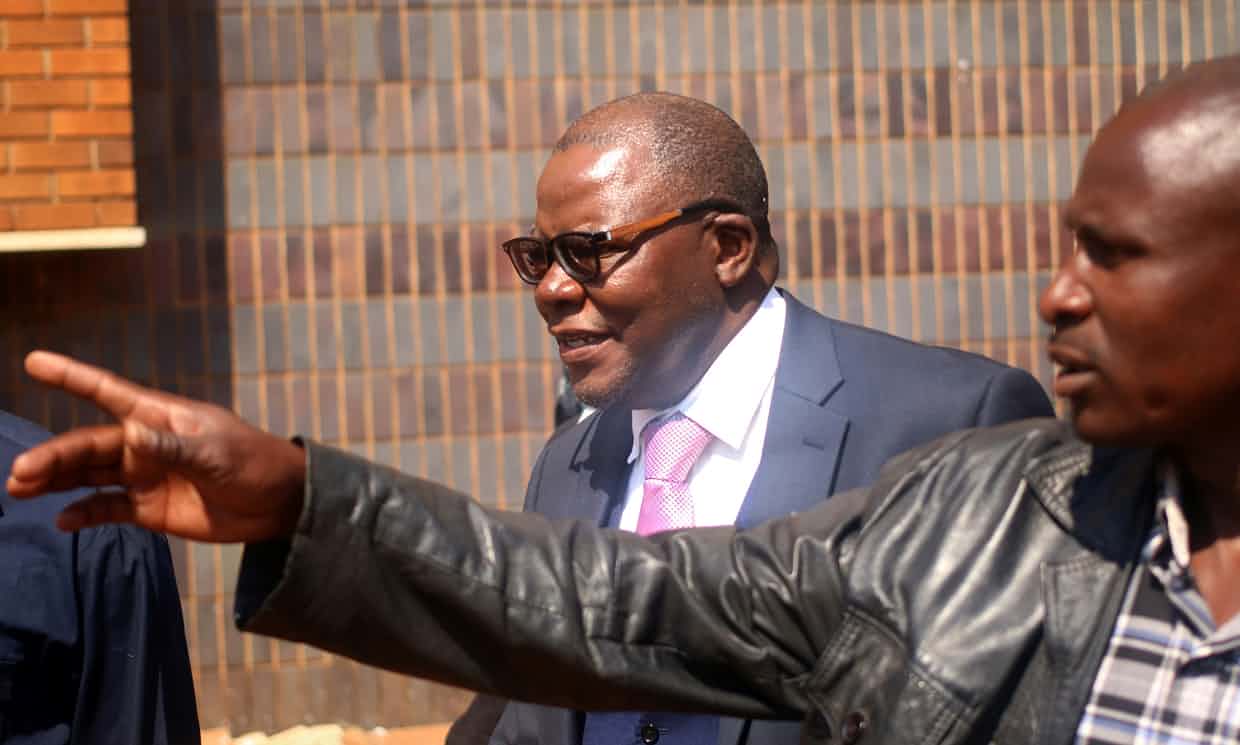 A senior opposition politician forcibly returned to Zimbabwe after being refused asylum in neighbouring Zambia has accused state security officials of carrying out an illegal abduction overseas.

Tendai Biti, a former finance minister and senior figure in the Movement for Democratic Change (MDC), appeared in court in Harare on Thursday to be charged over his alleged role in last week’s post-election protests.

On Friday Biti told the court that Zimbabwean security officials had pursued him on Wednesday when he tried to flee to claim asylum in neighbouring Zambia, but were stopped from wrestling him into a waiting vehicle at the Chirundu border post 220 miles (350km) north of Harare by a crowd of traders waiting to cross.

The next day masked and heavily armed Zimbabwean security personnel surrounded a Zambian police station where he was sheltering and forced him to return across the border with them despite a court order obtained locally stopping the handover, Biti said.

It came less than a week after results were announced in Zimbabwe’s presidential election, the first since Robert Mugabe was ousted in a military takeover last year after nearly four decades in power.

Hopes that the relatively peaceful campaign and voting would herald a political and economic transformation of the impoverished country have been dashed by violence and alleged human rights abuses since the poll.

The victory of Emmerson Mnangagwa, the leader of the ruling Zanu-PF party, has been contested by the MDC, which alleges fraud and launched a legal challenge on Friday. The court filing delays the inauguration that the government had been planning for Sunday. The court now has 14 days to rule, though MDC officials say they have little faith in the independence of Zimbabwe’s legal system.

The UN, Canada, the EU, the UK and a series of international observer missions have issued statements expressing concern at the treatment of Biti and the broader repression in Zimbabwe since polling day.

Biti, who was granted bail of $5,000 (£3,885) and told to surrender his passport, is also charged with falsely and unlawfully announcing results of the 30 July election. Eight other MDC leaders are being sought by law enforcement agencies.

On Thursday afternoon, prosecutors accused Biti of encouraging protesters on 1 August, urging them to pull down a Mnangagwa campaign poster while telling them: “Remove that poster, we don’t want thieves in this country.”

The protesters went on to burn the poster while damaging property at Zanu-PF’s offices in the capital. Six people were later shot dead by soldiers as the military moved to quell protests in central Harare.

Biti told the court that on Friday he had sought political asylum in Zambia out of fear for his life.

“I have been a human rights lawyer and a political activist since 2000 but I have never felt threatened in my political life like I have felt in the past seven days. It is unprecedented,” Biti, who was imprisoned and tortured in 2008, told the court.

The 52-year-old said his brother’s car had been shot at and his mother’s home surrounded by unmarked vehicles at night.

According to dozens of testimonies gathered by the Guardian, security forces have harassed hundreds of MDC leaders and activists, arbitrarily detaining and beating scores of people in recent days.

In a brief communication with the Guardian after going underground, Biti described the authorities as “murderers and fascists”.

Biti’s Zambian lawyer, Gilbert Phiri, said the Zambian high court had on Wednesday night issued an order to stop Biti’s deportation but Zambian immigration and police had refused to accept the court papers.

Authorities in Zimbabwe need international legitimacy to obtain the multibillion-dollar bailouts required to avoid economic collapse. The violence is a serious setback and some say the crackdown suggests splits within the ruling elite.