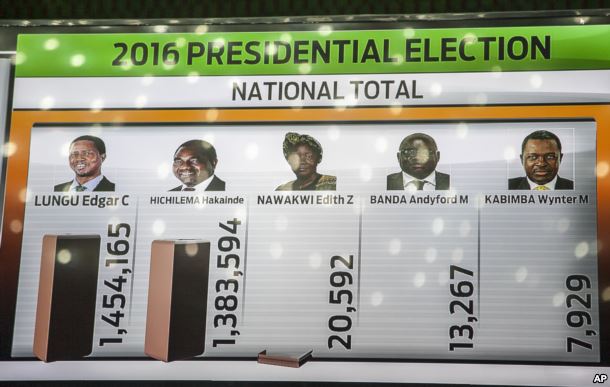 Three Zambian church groups have called for peace ahead of an anticipated court ruling on the opposition’s challenge to the results of the August 11 presidential election.

The Evangelical Fellowship of Zambia, the Council of Churches in Zambia and the Catholic Bishops Conference called on leaders of the opposition United Party for National Development (UPND) and the ruling Patriotic Front (PF) party to ensure their supporters do not engage in acts of violence after the court’s ruling.

The Electoral Commission of Zambia declared Edgar Lungu the winner of the presidential election with 50.35 percent of the total votes cast, compared to 47.67 percent for the main opposition candidate, Hakainde Hichilema, of the UPND.

But the UPND petitioned the Constitutional Court to reject the result, citing alleged voter irregularities and fraud.

Many Zambians have expressed concern about possible clashes between supporters of the two parties after the court’s ruling, which is expected Friday.

In an interview with VOA, Father Cleophas Lungu, general secretary of the Catholic Bishops Conference, said the church groups have appealed for calm.

“We also indicated that we are concerned that there hasn’t been enough commitment from the political leaders both from the Patriotic Front as well as the UPND with regard to accepting the outcome of the ruling,” he said.

UPND candidate Hichilema has reiterated his call for a meeting with President Lungu to help resolve post-election tensions and violence. But Lungu dismissed the call, saying he would only meet the opposition leader if Hichilema renounces violent acts allegedly perpetrated by UPND supporters.

Father Lungu says the church groups are working behind the scenes to arrange a meeting between the two leaders.

“The church did receive a request for such a meeting and for the church to be the mediator, and efforts have been ongoing in terms of bringing the two sides together,” he said.

He said President Lungu and Hichilema must demonstrate that their parties respect the rule of law and will respect the decision of the court.

“Now is the time for people to avoid talking in a manner that would provoke people, who may be aggrieved by the Constitutional Court ruling,” he said.