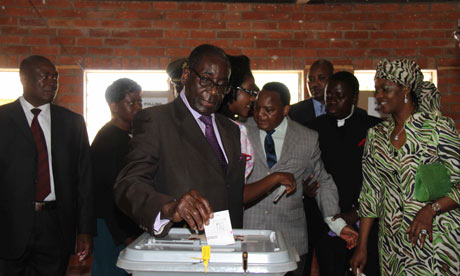 Government has come up with a number of amendments to the electoral laws to guarantee the credibility of the forthcoming harmonised elections, parliamentarians heard yesterday.
Vice President Emmerson Mnangagwa, who also oversees the Ministry of Justice, Legal and Parliamentary Affairs, told senators that some of the changes included making the Zimbabwe Electoral Commission independent and giving it custody of voter registration, introducing polling station-based voter registration and embracing the biometric (electronic) voting system.
He was responding to submissions from senators who were debating the General Laws Amendment Bill that will align the Electoral Act to the Constitution. MDC -T senators queried whether the General Laws Amendment Bill would guarantee the credibility of future elections claiming that the ruling party had used gaps in the laws to rig previous elections.
“This Bill will align the Electoral Act with the Constitution in many important areas including removal of the post of Registrar of Voters whose function will be taken over by ZEC,” said VP Mnangagwa, who is also the Acting President.
“ZEC is independent. It is not under my administration. In terms of accounting it was under my ministry until the passing of the Finance Act about three weeks ago. They would go through the Ministry of Justice in terms of spending Government money but now they have been given an accounting officer.
“In the past we had constituency-based voters’ roll and we went forward-based voters’ roll. We are now moving to polling station-based voters’ roll. The voters’ roll has now been removed from (former Registrar of Voters Tobaiwa) Mudede wamati hamudi; Now chimudai because we removed (it from him); It is now in the hands of ZEC.”
VP Mnangagwa said there was nothing wrong with staff from Mr Mudede’s office assisting ZEC officials on how to manage election material. He said the staff was only handing over and training ZEC staff. The VP also dismissed claims that security personnel would play a role in the management of elections.
He said only civil servants could assist, as such security personnel would be nowhere near the running of elections. VP Mnangagwa said ZEC was “completely independent” making it impossible for Government or political parties to interfere with its operations.
“You (MDC-T senator, Mr Morgan Komichi) mentioned that I have interest in my party winning, you are right. If you do not have interest in your party winning ndezvako, Ini, I have interest in my party winning. In the past this was an area of criticism because it was Government running elections. Now that has been removed. Government has no role anymore in the running of elections. It is now ZEC running elections,” said VP Mnangagwa.
He said the current electoral provisions in the Constitution were a compromise of the political parties that were in the Inclusive Government. VP Mnangagwa said Government also approved biometric voting though officials were still consulting on how to manage it.
“It is a process which requires the training of our people, acquiring correct equipment for that. We are running a parallel system now. If we reach elections when the biometric equipment and so on and technical persons are in place, we use it, if not we continue (with manual system).
“But the system (biometric) has been accepted. We are also consulting countries who have taken on board the biometric system for us to learn from them because most of the countries we have consulted are saying they made a mistake because in some cases it collapses and they go back to manual,” said VP Mnangagwa.