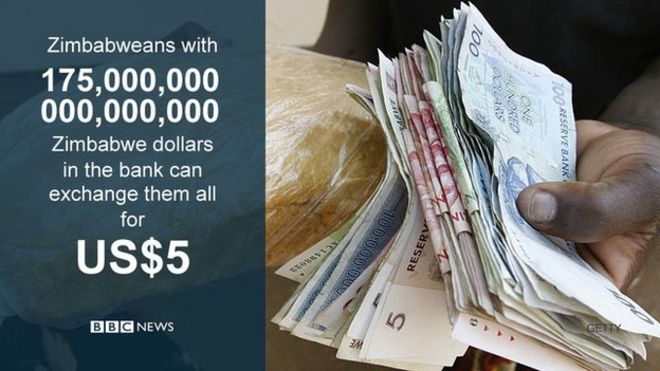 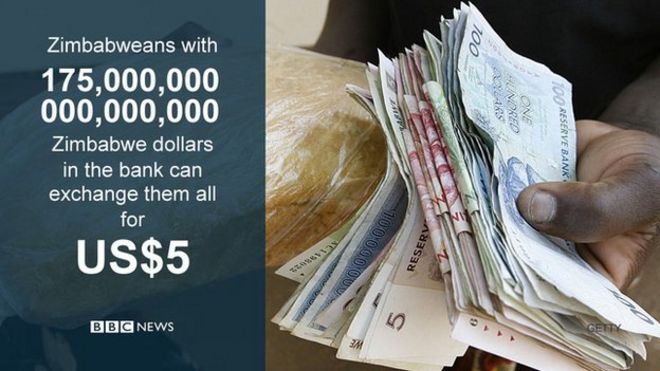 Zimbabwe is phasing out its local currency, the central bank says, formalising a multi-currency system introduced during hyper-inflation.

Foreign currencies like the US dollar and South African rand have been used for most transactions since 2009.

Local dollars are not used except high-denomination notes sold as souvenirs.

Higher balances will be exchanged at a rate of Z$35 quadrillion to US$1.

“We cannot have two legal currency systems. We need therefore to safeguard the integrity of the multiple-currency system or dollarization in Zimbabwe.”

Zimbabweans have until the end of September to exchange their local dollars.

Correspondents say this is likely to only affect those with savings accounts.

Ahead of the abandonment of the Zimbabwean dollar in January 2009, officials gave up on reporting official inflation statistics.

Towards the end of 2008, annual inflation had reached 231m%, pensions, wages and investments were worthless, most schools and hospitals were closed and at least eight in 10 people were out of work.

The highest denomination was a $100 trillion Zimbabwean dollar note.

A four-year unity government, that ended in 2013 with President Robert Mugabe’s re-election, helped stabilise the economy but it still faces huge challenges.

One of the problems has been the shortage of coins that kept prices high as retailers often rounded them up and shoppers were given change in sweets or pens.

Over the last six months, the central bank has introduced about $10m (£6.4m) worth of “bond coins” into circulation, but they have not been popular with consumers who fear that it is the first step in the re-introduction of the Zimbabwe dollar.

During campaigning ahead of the last election, some ruling Zanu-PF party supporters had suggested this could happen, but the central bank governor has since ruled that out.

Zimbabwe’s economy has struggled since a government programme seized most white-owned farms in 2000, causing exports to tumble.

Mr Mugabe has always blamed the economic problems on a Western plot to oust him.