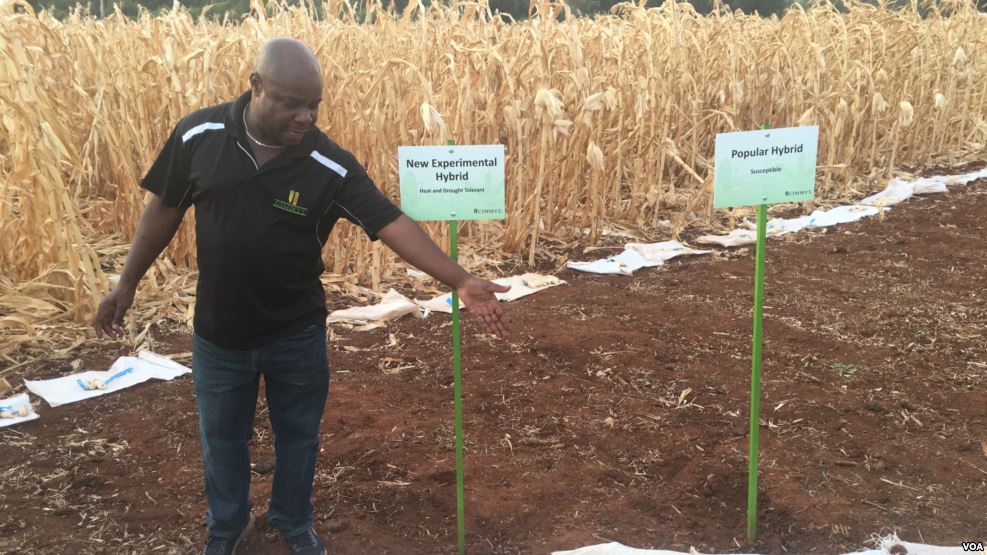 Scientists in Zimbabwe say they have developed new heat- and drought-tolerant varieties of maize that may be ready for sale ahead of the next planting season.

The seeds from the International Maize and Wheat Improvement Center were developed to combat drought-induced food insecurity that has affected millions in southern Africa over the past year.

The International Maize and Wheat Improvement Center — better known by its Spanish acronym CIMMYT — says the new varieties could play a significant role in reducing the problem of food insecurity in Zimbabwe and other parts of Africa.

Cosmos Magorokosho is a senior scientist with CIMMYT responsible for coming up with climate-resilient maize strains.

“I call them a game-changer, because farmers will be able to get some food security if they are able to adapt these varieties,” said Magorokosho. “Food security in Africa will be partly addressed through these varieties, because in Africa, maize is life. A lot of seed companies in southern Africa, east Africa [and] north Africa have shown keen interest in adopting these hybrids because they know that they will be working in their environments.”

He said farmers in Algeria, South Africa, Egypt, Uganda, Malawi, Tanzania and South Africa, along with Zimbabwe, have shown interest in the new maize varieties CIMMYT developed with funding from the U.S. Agency for International Development.

Early this year, Zimbabwe declared a national disaster after about a third of its 13 million people struggled with food shortages, caused by El Nino-induced drought.

The CIMMYT official said the effects of that drought could have been mitigated had the heat- and drought-tolerant maize varieties been on the commercial market.

Apollonia Marutsvaka from Zaka district — one of the driest regions in Zimbabwe — planted one of the new seeds from CIMMYT last season.

“There is real hunger here this year,” said Marutsvaka. “I am just lucky that I replanted the demo seed [from CIMMYT] after the first crop failed. Compared to other conventional seeds, the demo seed sustained the heat and dry conditions we experienced. Despite the heat and dryness, I got something, and I will only run out of food around February.”

Marutsvaka’s neighbor, Amon Makonese, 66, also managed to harvest enough to look after his family after planting the new seeds.

“It is a good seed because it is drought-resistant. The only thing is that it is not in the market. We look for it, and we do not get it when we want it. It should be put in the shops where we buy other seeds,” said Makonese. “We end up buying other varieties because we do not find this variety in the shops.”

That is not good news, given that Zimbabwe’s next growing season is expected to begin soon. Zimbabwe Super Seeds — one of the companies distributing the new varieties — said it is working to meet farmers’ demands.