Home Development 10 Important Things To Know About Africa in 2014 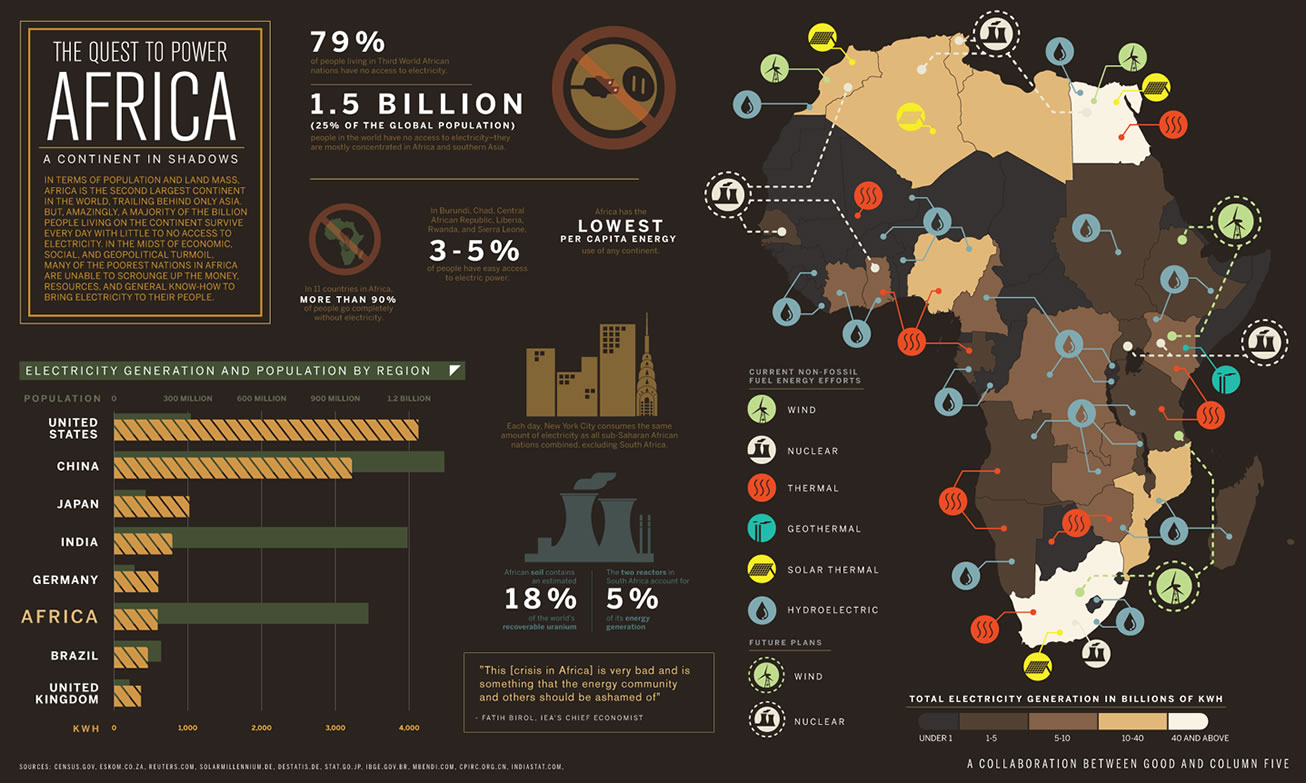 “If your yam is white, you should cover it while you eat,” an African proverb reads. Put in context of the recent economic resurgence across the continent, the question posed will read: should the Africa rising swansong be overplayed or understated? Should Africa focus on making it work instead of revelling in potential?

For the best part of the years preceding the notoriously famous prediction by The Economist, which labeled the continent as “hopeless”, owing to political instability and incessant wars at the time, Africa’s steady economic rise has been a regular feature in the media. The continent, now a firm favourite for foreign investors, with several of its economies amongst the fastest growing markets in the world, has been on the upward trajectory since the turn of the millennium, despite the global economic crises and the recent austere situations in Europe, making the envy of other markets.

Also, investors and business owners now pay more attention to Africa’s emerging markets and the continent’s future looks bright. But, surely, there is still a lot of work to be done to ensure Africa actually births its potential. Below, we explore 10 things you need to know about Africa and its economic resurgence (…we know there are a lot more, so please add yours in the commentary box below )

The role of small businesses

Small businesses now play a pivotal role in several African countries. In sub Sub-Saharan Africa, the support for entrepreneurship is on the rise –making it easier for people to create jobs for themselves and others and provide for their families and community. For example, The National Bureau of Statistics (NBS) reported that there are over 17 million SMEs in Nigeria – Africa’s second largest economy and most populous nation with over 160 million people. Similar stories also abound in other Sub-Saharan African nations.

According to Global Entrepreneurship Monitor 2012 sub-Saharan African Report, the region is now experiencing what is called “entrepreneurial revolution” which has reinvigorated it with new opportunities, increased employment and a robust rise in Gross Domestic Product (GDP), which is acclaimed as one of the highest in the world.

Africa is now home to more international private firms. This is due to the increasing adoption of seamless business policies, lowered corporate taxes, and strengthened regulatory and legal systems in some African countries.

The World Bank Group “Doing Business 2014: Understanding Regulations for Small and Medium-Size Enterprises” released in October 2013 reported that sub-Saharan Africa continues to record a large number of reforms aimed at easing the regulatory burden on local entrepreneurs, with 66 reforms adopted in the past year (June 2, 2012 – June 1, 2013).

Of the 189 nations surveyed globally, 18 African economies made the top 50 most reformed economies while Rwanda, Côte d’Ivoire, and Burundi are among the global top 10 improvers in making the biggest improvement in business regulations.

This year, top African countries like Mauritius at 20 position, Rwanda 32, South Africa 41, Tunisia 51, Botswana 56, Ghana 67, Zambia 83, Morocco 87, Namibia 98 and Cape Verde 121 are testament to the growth in ease of doing business in Africa.

The report also showed that of the 47 economies in the Sub-Saharan Africa, 31 implemented at least one business regulatory reform in 2012/13.

Africa is the second-fastest-growing region in the world, according to economic experts. The continent has been reawakening with new zeal for economic growth and development, and the rate of return on investment is higher than anywhere else in the world.

The World Bank in its latest semi-annual report, Africa’s Pulse, forecast an average 5.3 per cent growth in 2014 up from its 5.1 percent projection.

Also, the IMF estimates that GDP growth in sub-Saharan Africa will hit an average of 6.1 percent next year, far exceeding the expected global average rate of 4 percent. It also says that seven of the world’s 10 fastest-growing economies for the period 2011-2015 will be African.

Africa will have the largest workforce

Africa’s labor force is expanding. It is also endowed with the world’s youngest population. This offers the continent a chance to reap a demographic dividend by using its young workforce to boost economic growth.

According to Global consulting firm McKinsey & Co, Africa will be home to one in five of the planet’s young people by 2040. This means that in less than 25 years, majority of its population will be youth. By then, the continent will have an average of about 1.1 billion—more than the size of China’s or India labour force.

If Africa provides its young people with the right education and skills needed, this workforce could become a significant source that will propel the continent into economic prosperity.

Africa has a huge appetite

Africa is now in the age of consumerism with prediction of being the world’s leading consumer market by 2050. This is fueled by interrelated social and demographic changes that drive the continent’s growth engine, urbanisation and rise of the middle-class African consumer.

In fact, not less than 31 million of African households have joined the world’s consuming class since 2000.

Financial consulting firm, Deloitte, reported that more than one-third of Africans are middle class today and by 2060, continent’s middle class will encompass 1.1 billion people- about the current size of the population.

This rise will create more demand for local products and spark a cycle of increasing domestic growth.

By 2030, Africa’s top 18 cities will have total spending power of $1.3 trillion, McKinsey & Co estimates. Cashing in on the potential, retail heavyweights like Wal-Mart, Massmart, Shoprite and Atterbury are taking advantage by building stores across the continent. Also, French retail giant Carrefour also partnered with the French distributor CFAO to open stores in eight countries across the continent by 2015.

Africa has leapfrogged into digital age, and this has been sustained by low Internet rates, increasing mobile penetration and connectivity and mobile apps, which is reshaping youth culture and creativity.

According to a recent report released by the World Bank and African Development Bank (AfDB), about 650 million Africans, particularly the youths (defined by the United Nations those aged 15 to 24); use mobile phones for both social and functional purposes – surpassing the number in the United States and or Europe.

In fact, it is reported that in some African countries more people have access to a mobile phone than to clean water, a bank account or electricity!

Global accounting and consulting firm Deloitte’s report – The Sub-Saharan Africa Mobile Observatory – also stated that mobile phone penetration in Africa has increased rapidly in the past 12 years, from 1 percent in 2000 to 54 percent in 2012.

The rise of the African woman

Although much still needs to be done, fair gender representation, which has been underutilized as a resource for too long, has received a boost with improvement in the number of African women holding key public offices, i.e. Joyce Banda, Ngozi Okonjo-Iweala, Nkosazana Dlamini-Zuma among others.

African women have penetrated the business and political corridors in many countries and are increasingly filling roles traditionally occupied by men. Their representation in parliaments in sub-Saharan Africa is now higher than in South Asia, the Arab states or Eastern Europe.

According to the 2012 data from the Inter- Parliamentary Union, women occupy 20.2 percent of parliamentary seats in sub-Saharan Africa, which is slightly higher than the world average of 19.5 percent.

Also, going by the World Bank estimates that eliminating barriers which discriminate against women’s working in certain sectors could increase labor productivity by as much as 25 percent, sub-Saharan is already achieving this with an estimated 50 percent of the agriculture sector being women – higher than in some countries.

To achieve this third Millennium Developmental Goal, the continent has declared 2010-2020 as African Women Decade (AWD 2010-2020) the decade where African women and the girl-child are empowered to take charge of their rights in being an equal and active participant in the political and social-economic development of the continent.

Unlike the past when most African countries depend on oil and mineral resources as the bedrock of their economies, the face of business is now changing as more African nations are now diversifying into non-oil sectors. For instance Africa’s most developed economies like South Africa, Morocco and Egypt, have been able to grow their agriculture, manufacturing, and retail and hospitality sector to create more jobs.

The Moroccan government for example set a goal for the country to become the industrial automotive supplier for Europe. Today, the sector employs more than 60,000 people.

Also, with about 60 percent of the world’s uncultivated arable land embedded in the continent, African countries are now paying attention to agriculture as governments and foreign investors contribute substantial investment into farming for consumption and economic growth.

More so, in a number of African nations, most especially Kenya, which has seen the birth of Africa first tech incubator- the ihub, the role of technology in economic growth is of utmost importance as large multinational corporations and government agencies now pay close attention to developments in the tech sector as regards soci0-economic influence, job creation and its contribution to GDP. The Kenya government also recently launched Konza City, reportedly said to be Africa’s silicon savannah.

Although mobile penetration is growing at an impressive rate, the continent is slowly waking up to technological opportunities as more than 80 percent of the African continent is still unconnected.

International Telecommunication Union (ITU) recorded that only 16 percent of Africa’s 1 billion people use the Internet, half the rate in Asia Pacific and below a global average of 36 percent.

African Development Bank (AfDB) also reported that the information and community technology sector contributed just 7 percent to the continent’s GDP last year, and as seen in this article, Africa’s wealthiest still amass their fortunes through resources.

However, despite these shortcomings, technology is making an impression reducing Africa’s youth unemployment rate. It is also making social services more accessible to individuals.

In Kenya, mobile money transfer system M-Pesa, launched by the country’s largest telecoms operator Safaricom is helping to make a huge economic impact. With a total transaction of about $1 billion per month, the technology service has enabled about 67 percent of Kenyan adults to access banking.

Youths are increasingly participating in leadership

With the number of the youth population sky-high, more youths are coming forward to have a say in the future Africa promises. Although youth participation maybe relatively low, depending on the country, the response from social media and technology bares evidence that youths are now more interested in making their voice heard as the economic and social pattern takes shape.

Africa’s next generation is participatory and involved in the development and growth of the continent. Scores of young, western-educated youth and new breeds on the continent have established businesses that are driving the economy, and are constantly playing a part in the continent’s socio-political renaissance. They are also at the forefront of innovations coming out of the continent.