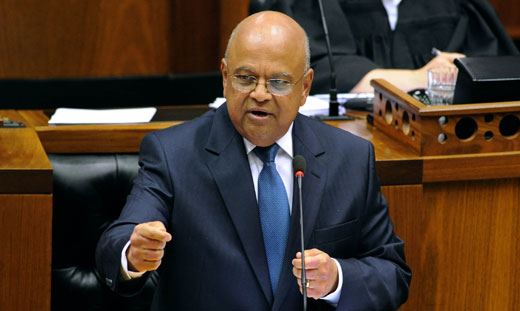 Despite the sluggish local economic growth brought about by the 2008 global recession, Finance Minister Pravin Gordhan has not gone back on his 2013 growth projections.

Tabling his 2014 Budget Speech in Parliament on Thursday, Minister Gordhan projected the Growth Domestic Product to increase from 2.7% in 2014 to 3.4% in 2016.

Over the next five years, Minister Gordhan said government would focus its efforts on economic growth. This would be backed-up by plans to increase investment in electricity and transport infrastructure.

Despite the South African economy performing below its potential – which saw growth declining from 2.5% in 2012 to 1.8% in the fourth quarter of 2013, the minister said bold decisions were needed going forward.

He added that an increased spend on public infrastructure would encourage private investment, while a stronger employment growth would contribute to increased household consumption.

“Potential domestic risks to the outlook include further delays to the introduction of new infrastructure, particularly additional electricity capacity, higher inflation due to the weakness of the Rand and protracted labour disputes which could depress consumer and business confidence,” he said.

At the time when President Jacob Zuma took office in 2009, the economy had just shed almost one million jobs and the country’s revenue levels had gone down notably.

At that point, the National Treasury decided to take bold steps to ensure that the then bleeding economy recovered.

“We stabilised the economy and ensured a recovery. Our response was to implement an aggressive fiscal adjustment. When global trade went into reverse, we took steps to improve competitiveness of businesses within the framework of the Industrial Policy Action Plan.

“We accelerated infrastructure investment and we expanded financial assistance to businesses in distress,” said Minister Gordhan.

He said the response to the crisis was founded on a principle of government, business, labour and communities working together – under the facilitation by the National Economic Development and Labour Council (Nedlac).

“And so, although the great waves of financial turbulence and the slow growth in the developed economies have constrained our economic recovery, we have recorded positive growth since 2010.

“We have more than recovered the jobs that were lost. And we have initiated a coordinated infrastructure investment programme, organised into 17 Strategic Integrated Projects to catalyse opportunities in mining, industry, agriculture and services across the country. We have saved this country from the worst!”

The unemployment rate remains at an average of 24% – which Minister Gordhan said was unsustainable.

He said government had a strategy in place to deal with the high levels of unemployment. This included stepping up the implementation of the Expanded Public Works Programme; the implementation of the Community Work Programme in every municipality by 2017; the introduction of the Youth Employment Tax Incentive last month – which has already recorded 56 000 beneficiaries and the establishment of the Special Economic Zones, industrial incentives and support for small agriculture and labour-intensive sectors.

Minister Gordhan said skills development and Further Education and Training (FET) programmes had been ramped-up while government had stepped-up its support for Small and Medium Enterprises and the fostered partnerships with the private and public sector development agencies through the Jobs Fund.

Deficit to be decreased, inflation to stabilise

Minister Gordhan said despite slower growth, the 2013/14 budget deficit is projected to be 4% of GDP, lower than projected in October.

“Investment is forecast to increase by about 5% a year and the current account deficit will average 5.8% of GDP over the medium term, while consumer price inflation will return to levels within the target band between 2015 and 2016,” he said.

Minister Gordhan said over the next three years, inclusive growth – as envisaged by the National Development Plan – will be government’s motto.

To boost growth, he said several measures and investments would be undertaken. These include:

– A R15.2 billiion injection from the Economic Competitiveness and Support Programme to assist businesses upgrade their machinery and increase productivity over the next three years;

– Allocating R620 million to the digital broadcast migration programme; and

– To create one million jobs in agriculture by 2030, government will spend R7 billion on conditional grants to 435 000 subsistence farmers and 54 500 smallholder farmers.

In recent weeks, the Rand has fallen to its weakest against the Dollar. On Thursday, Minister Gordhan said a weaker exchange rate was a risk to inflation, while it supported exporters.

“The global economic outlook remains unsteady – some of the advanced economies have returned to growth, others continue to lag. The slowdown in quantitative easing by the Federal Reserve has caused further uncertainty to financial markets, currency volatility and capital outflows from emerging markets,” he said.

He said government will expand its employment programmes over the next three years and continue to support job creation by the private sector.

To counter unemployment levels, especially amongst young people, government aims to create six million work opportunities over the next five years. “Increased support and tax relief for entrepreneurs and small businesses is proposed. Incentives for industry are strengthened, including funding for special economic zones,” he said.