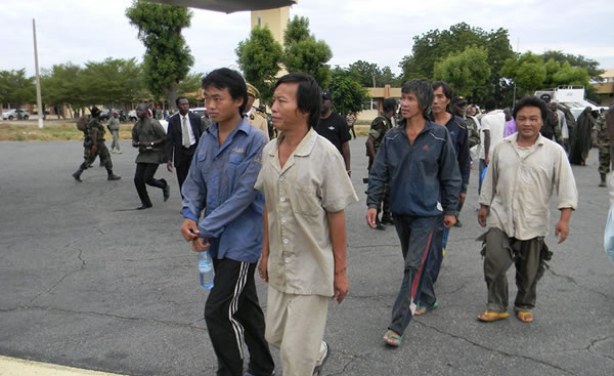 Cameroon’s president has said that 27 hostages, including 10 Chinese workers, held by suspected Boko Haram militants have been released.

But there were speculations in Yaounde that government may have swapped the hostages with some low level Boko Haram fighters captured during confrontations between the Cameroonian army and the sect.

Also freed was the wife of Cameroon’s Vice-Prime Minister Amadou Ali. Previously, it was speculated that the sect demanded for a ransom of $400,000 in exchange for the Vice Prime Minister’s wife.

President Paul Biya said that the hostages, seized in May and July close to the Nigeria border, were safe.

Boko Haram is seeking to establish an Islamist state in Nigeria but its fighters often cross the long and porous border with Cameroon.

Many Nigerian civilians in border towns have fled to Cameroon to escape Boko Haram attacks, which have been stepped up in recent months.

Cameroon has reinforced its troops in its northern regions.

President Biya said in a statement on state radio: “The 27 hostages kidnapped on May 16, 2014, at Waza and on July 27, 2014, at Kolofata were given this night to Cameroonian authorities.

“Ten Chinese, the wife of the Vice Prime Minister Amadou Ali, the Lamido (a local religious leader) of Kolofata, and the members of their families kidnapped with them are safe.”

No details were given on the circumstances of the release or whether a ransom was paid.

In July, Cameroon said Mr Ali’s wife and maid were abducted in “a savage attack” on his home in Kolofata by Boko Haram militants.

Mr Ali managed to escape to a neighbouring town.

Efforts to step up regional co-operation gained momentum after Boko Haram caused an international outcry by abducting more than 200 girls from a boarding school in north-eastern Nigeria.

The girls are thought to be held in the vast Sambisa forest, along Nigeria’s border with Cameroon.