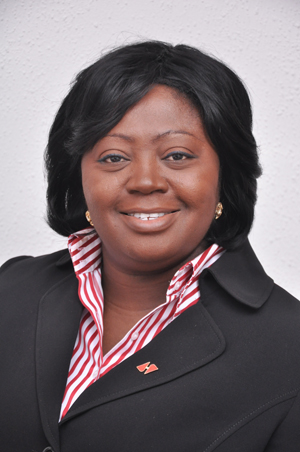 She takes over from Oliver Alawuba who has now been promoted to head the West Africa operations of the UBA group. Alawuba will oversee UBA’s business in Ghana, Cote d’Ivoire, Burkina Faso, Senegal, Guinea (Conakry), Liberia, Benin and Sierra Leone.

On assuming her task, Bawuah will be faced with developing programmes and strategies that will enable the bank meet up with the Bank of Ghana’s (BoG’s) second round of recapitalisation which starts this year.

Bawuah who joined UBA Ghana on March 1, 2013 as the Deputy Managing Director was an Executive Director at Zenith Bank. She also previously held the positions of General Manager, Marketing and Group Head Retail Banking. She also worked at Standard Chartered Bank as a Business Financial Manager, Cal Bank as a Senior Financial Analyst and at Strategic African Securities as an Authorised Dealing Broker.

Bawuah holds a BSc in Actuarial Science, an LLB, EMBA (Finance) from University of Ghana, as well as numerous leadership qualifications from Harvard Business School, Columbia, INSEAD and Institut Villa Pierrefeu in Switzerland.

She assumed her role at the beginning of this month stating her readiness to take UBA Ghana to new heights.

“UBA Ghana in 2014 will be driven by a diligent focus on our core values and in so doing the achievement of the first and second goals will be effortless, as we all humble ourselves to serve with excellence, empathize with our customers and work to make the bank the premier banking institution in Ghana whilst doing so with integrity and every effort we can muster,” she said.

Commenting on Bawuah’s appointment, UBA said it has gained a consummate banker and a key asset and it believe that “with the experience she has garnered through her illustrious banking career, she would take UBA Ghana to higher levels.”