Home Business Adesina – The Strength of Personal Conviction under fire 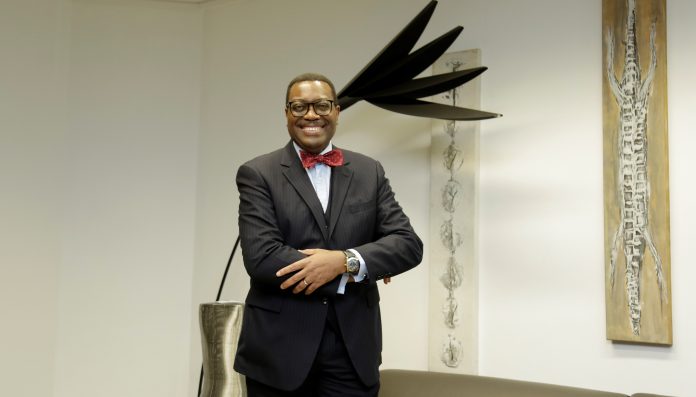 By Ken Giami and Kingsley Okeke

It was an unusual speech; indeed, not the formulaic expressions, especially when Africa is in focus. But the audience knew what to expect from the message – a perfect whisk of hope, present realities, and futuristic thinking. Punctuated by intermittent applause, Dr Akinwumi Adesina, the erudite President of the African Development Bank, began by making an unambiguous statement, “Africa can no longer be ignored.”

Dr Adesina was the guest of the London Stock Exchange, where he was invited to open the market for the 22nd January 2020. The event was held on the sidelines of the maiden UK – Africa Investment Summit.  He was among the African leaders invited to the Summit, organized at the behest of the UK Prime Minister, to promote increased bilateral relations between Africa and the United Kingdom.  His exceptional oratory skills have earned him admiration from leaders within and outside the continent. But there is more – his sincerity and his staggering ability to draw you in with his message is surreal.

In his words: “Last year 17 African countries grew by 3-5%, and 20 countries grew by 5% and above. Indeed, six of the fastest-growing economies in the world are in Africa.” Continuing, Dr Adesina observed that, “Foreign direct investments to Africa grew at 11% last year, far exceeding the 4% growth in Asia, even as FDI declined by 13% globally and by 23% in developed economies’’ – declaring with deep personal conviction that “This is a resurgent Africa!”

According to him: “ever since I was elected in 2015, as President of the African Development Bank, daily my colleagues and I carry a torch for Africa. A torch of development. And its flame must never die!’’

But that vision, conviction and passion for Africa’s development is under fire. He currently faces opposition to his reelection for a second term of 5 years, from some non-regional members who may not be at ease seemingly with his passion – despite the fact that he has been endorsed by all 52 African heads of government currently unopposed in the elections coming up in May 2020. However, that has not dampened his spirit. The events of the last few weeks since the outbreak of the COVID-19 and the Banks numerous interventions shows he is firing on all cylinders. One thing seems certain; his type are strongest when faced with challenges.

Where, then, does he draw his strength?

Dr Adesina’s draws his strength from, “people such as cocoa farmer Antoine Mani Tonye from Cameroon who has seen healthy yields from the moment he began planting a locally adapted seed variety.” “People such as millet seller Robiro Kadokah from Togo whose business has been thriving since the opening of a new highway in his area.” And people such as, “IT-specialist Jeanne Yamfashije from Rwanda who helps girls in her country excel in science, technology, engineering and math.” He draws his strength from real people, real results.

A 2019 Report by the World Bank, titled, ’Lifeline: The resilient Infrastructure Opportunity’ notes that African countries comprise at least half of the top 15 most-affected countries in each category of infrastructure disruption. The report further notes that financing for African infrastructure currently falls short by between $68 billion and $108 billion per year. Add COVID-19 outbreak to the mix, which experts are projecting will sink Sub-Saharan Africa further to the tune of about $35 billion to $100 billion, and you have an impending disaster.

Addressing these gaps is what keeps Dr Adesina awake at night.

In his keynote speech during the 8th African Leadership Persons of the Year in February 2020 in Johannesburg, Dr Adesina said: “I focus on solutions, not problems. My principle for development is also simple: I simply list down the things I feel most ashamed of, and then I do the opposite. It’s how I came up with my idea for the African Development Bank’s High 5 strategy to light up and power Africa, to feed Africa, to industrialize Africa, to integrate Africa, and to improve the quality of life of the people of Africa. Five simple, strategic, and highly focused objectives.”

Thanks to the foresightedness and commitment of Dr Adesina and his team at the African Development Bank, the High 5 Strategy is changing the narrative and bringing succor to millions in the continent. Real people that have been dislocated by poor infrastructure. This all-hands-on-board approach has yielded unprecedented results in the last four years.

The litany of projects, and the many firsts recorded by the Bank under his leadership and his endearing persona are arguably factors that put his detractors, just one step out of the cave.

A quick look at the Bank’s infrastructural revolution on the continent, anchored on the High five strategy, presents more than enough grounds for Dr Adesina’s necessary reelection. For emphasy, we are zeroing in on two critical areas that have remained a hard nut for the continent – Energy and Roads infrastructure. On these two planks, the Bank has done nobly.

In the Energy Sector, the Bank has supported significant power generation and transmission lines to interconnect power production and consumption centres to households and to support industries. The Bank financed the Ethiopia-Djibouti Power Interconnection Project and the Ethiopia-Kenya Transmission Highway Project, which is East Africa’s first high voltage direct current (HVDC) power line and expected to boost the exchange of electricity between the two countries. The Bank supported the first inter-region 400 KV power inter-connector between Zambia, Tanzania and Kenya linking EAC and SADC countries.

These projects have contributed to helping Ethiopia to become an Energy Generation and Export Hub with a capacity to export toward Eastern and Southern Africa region while enhancing the power-trading capacity of SAPP in the SADC Region.

Specifically, in the SADC region, the Bank funded the Kariba North and Ithezi-Thezi Power Hydro Generation Projects in Zambia-Zimbabwe, which provided power to the SADC region through the Southern Africa Power Pool (SAPP).

The Bank has also supported some projects focused on connectivity, as well as corridor modernization, ports and railways modernization, and air transport modernization. The Bank’s investment has supported the construction and improvements of operations of following multinational road corridors, which facilitated a safer and efficient movement of people and goods across borders and landlocked countries to seaports, therefore facilitation regional integration and Intra- African trade as well as with global markets.

There have also been significant achievements for the Bank in the SADC region, especially in the ports and bridges sub-sector. The Bank has provided support to SADCs key transport corridors over the past ten years, with several interventions underway. This support has been for Roads, Rail, port and trade and transport facilitation projects on the Nacala, Mtwara, Walvis Bay, North-South, and a trade facilitation support project on Lobito Corridor. Walvis Bay Container Terminal, Namibia – The Bank provided financing of around USD 300 million in 2013, for expansion of the port container terminal which serves as a gateway for the SADC region, specifically for the land-locked countries. It also fully resonates with the AfCFTA agenda. Completion of the new port terminal will triple its container handling capacity from 355,000 TEUs to 1,005,000 TEUs per annum, making it one of the largest port terminals in the region.

The Bank provided around USD 82 million to co-finance the construction of crucial Bridge on Zambezi River Crossing on the North-South Corridor linking Botswana-Zambia, but also Zimbabwe-Namibia. Completion of this vital bridge by June 2020 with the One-Stop Border Posts (OSBP) completed in 2019, shall see the bottleneck removed along the North-South Corridor linking the Port of Durban in South Africa to several landlocked countries in the Southern Africa region will reduce waiting time from 14 days to just one hour.

Impacts of Bank support on major corridors such as the Nacala corridor as an enabler for regional economic integration and trade competitiveness are visible.

AfDB and other development partners – EU Delegation, European Investment Bank, JICA and the governments have supported the development of about 1,170 km of the corridor, and One-Stop Border Posts (OSBP) between Mozambique-Malawi-Zambia through five phases of the project with a total commitment of USD 625 Million. This major infrastructure will facilitate the movement of good and people across borders along with eight (8) countries in the region. It will stimulate local economic activities in agriculture, agro-forestry, fisheries and tourism in the area.

The Central Corridor Acceleration Programme with the landmark project Chalinze and Dar es Salaam Toll Road a 144 km dual and triple carriageway toll road between Chalinze and Dar es Salaam. The project provides an essential gateway within Tanzania (to central, northern and southern Tanzania). It connects landlocked Uganda, Rwanda, Burundi, DRC, Zambia and Malawi to the Dar-Es-Salam port. It would modernize the third priority ARTIN corridor in East Africa and facilitate travel for people and goods across the borders between the countries.

The North-South Corridor (NSC) Road Rehabilitation involving nine road links along the North-South Corridor including the Chinsali to Mpika road have reached financial close, with others such as five roads along NSC and will facilitate the movement of goods and people across borders along with eight countries in the region (namely: Tanzania, DRC, Zambia, Malawi, Botswana, Zimbabwe, Mozambique and South Africa).

AfDB projects have been all-encompassing. The Bank’s intervention has been bold and progressive.

It is not yet Uhuru. Africa is still a long walk to Eldorado, but in Adesina, we have found a force for good and a breadth of fresh air. We are confident that his second coming will consolidate on the innumerable gains of the Bank under his leadership. We only ask that his tribe increases – unfurling through the length and breadth of our continent, and his critics to stay constructive without recourse to unethical approaches and playing spoiler. More than ever before, it is Africa’s time!