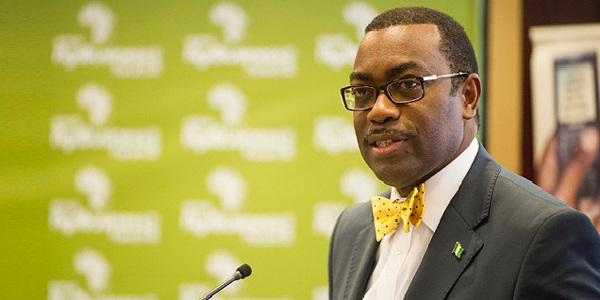 As part of efforts to mitigate the effect of climate change in the economic lives of the people, Dr. Akinwumi Adeshina, African Development Bank (AfDB) President, has recently announced that the AfDB has released US$12b, and mobilising additional US$50b to provide clean energy in Africa, including the Sahara-Sahel region.

The announcement was made at the 2015 Paris Climate Conference during the debate on a pan-African proposal, Great Green Wall Initiative, meant to “green” the continent from West to East intended to fight desertification. The project, which began five years ago, aims to tackle poverty and degradation of soils in the Sahel-Saharan region, on the 8,000-kilometre-long strip of land stretching from Dakar to Djibouti.

Dr, Adesina also noted that“there is a correlation between the effects of climate change – like the shrinking of Lake Chad, which was 25,000 square kilometres in 1967 but is now less than 2,500 – and the loss of livelihoods, radicalization, terrorism, forced migration, insecurity, poverty and deaths”.

“The livelihoods of 100 million people are in danger. We are aware that due to heat and drought, 40 million Africans from this region migrate to North Africa and later to Europe. Some die during the long journeys. We should solve this problem”, he said.

Adesina singled out agriculture as a key component of changing the livelihoods of millions in the region together with other initiatives. “We are providing an additional $4 billion and leveraging an extra $40 billion to provide water in the affected areas. The problem has forced girls to drop out of school to look for water. If we don’t provide alternatives to the problems, people will still cut down the trees we are planting. This is because 75 per cent of deforestation is due to charcoal burning,” Adesina added.

Other speakers during the debate on the initiative agreed that urgent measures must be put in place to reverse desertification and save human life as those living in the Saharan-Sahelian region are among the poorest and most vulnerable to climatic variability and land degradation.

Kenya’s Environment Minister Judi Wakhungu concurred with her colleagues, calling on individual member countries to do their part so that the project does not fail. “In Kenya, we are using the water from the El Niño rains we are getting now to plant trees not only in drylands, but across the nation to realize the 10 per cent UN ceiling for forest cover and to secure our future,” Wakhungu said.

Laura Tuck, Vice-President of Sustainable Development at the World Bank, said that 300 million people in East and West Africa live in drylands. The World Bank, she said, will continue financing the initiative. “The project is doing wonders. Most land is being rehabilitated and used for farming. We have already bumped $4.4 billion into the project and pledge more $1.9 billion. This successful project is the best African and global answer to climate change and we will replicate it worldwide,” she said.

Representatives from the European Union (EU), United Nations Environment Programme (UNEP), Food and Agriculture Organization of the United Nations (FAO) and Global Environment Fund (GEF) all pledged more funding for the project and called for innovation, knowledge-sharing to make the project succeed and increase resilience to climate change.

The project has adopted the rural development approach where community members are sensitized to plant trees, manage them and practice agriculture on rehabilitated lands to secure their livelihoods.