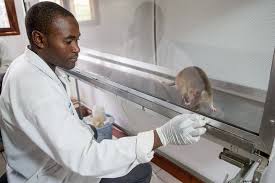 Scientists from APOPO, an international firm known for using rats to locate landmines, is now training the giant pouched rodents to sniff out tuberculosis among inmates in Tanzania and Mozambique.

Before doctors diagnosed Kulwa Malembeka with Tuberculosis (TB), he experienced severe pains in his chest, he would sweat heavily at night and whenever he coughed, he would discharge thick smelly mucus.

The 44-year-old farmer and trader from Tabora, was repeatedly tested for TB at a local district hospital, but doctors could hardly confirm the diagnosis due to lack of expertise.

While scientists are grappling to find a lasting solution for TB diagnosis and treatment, there seems to be some light at the end of the tunnel.

Charlie Richter, APOPO’s US director, said through its TB detection technology the organization is committed to carry out TB mass screening using rats that smell the presence of the Mycobacterium Tuberculosis found in sputum samples – mucus that is coughed up by the patient.

“We believe our unique TB Detection Rat technology will prove itself as an effective mass-screening tool. We then aim to expand the program to all prisons, shanty towns, factories and other settings in Tanzania, Mozambique and other high TB-burden countries,” Richter said. He said they also plan to do the same in high-risk groups such as those living with HIV/AIDS. “This will improve and save lives all over the globe at a low cost,” Richter added.

The APOPO TB detection rat technology is fast, cheap and has the potential to greatly lower screening costs in poor countries, Richter said. “While a laboratory technician may take four days to detect tuberculosis, a trained rat can screen a hundred samples in 20 minutes,” he said.

According to APOPO, the rats undergo a rigorous training process that begins when they are four weeks old. Right after the rat learns to open its eyes, it is introduced to various stimuli and learns how to socialize and interact with people.

Richter said the testing process starts when a rat is presented with a row of 10 TB sputum samples, when TB is detected the rat hovers over the sample for 3 seconds.

Khadija Abraham, an expert at Tanzania’s National Leprosy and Tuberculosis Programme, said once trained, the rats have a strong ability to detect a wide range of odorant molecules that could help track down undiagnosed TB cases especially in the rural areas. “Training an animal with a strong and reliable sense of smell to help detect disease in a vast country like Tanzania could potentially offer a valuable solution to help detecting the disease,” she said.