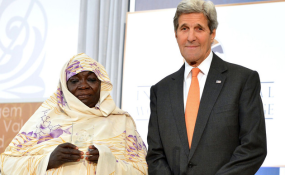 Sudanese entrepreneur Awadeya Mahmoud has recently been awarded the 2016 Secretary of State’s International Women of Courage Award, the US Embassy in Khartoum has announced.

In a press statement, the Embassy said, Awadeya Mahmoud was one of 14 outstanding women to receive this honour, which recognises women around the globe who have demonstrated exceptional courage and leadership in advocating for peace, justice, human rights, gender equality, and women’s empowerment. She was honoured by US First Lady Michelle Obama, Vice President Joe Biden, and Secretary of State John Kerry.

Secretary Kerry said, these women “are moving the world in the direction of true justice, of wider decency, and of equal rights for all.”

Mahmoud became a roadside tea seller when her family moved to Khartoum, and has since been involved in promoting economic opportunities for women working in the informal sector. In 1989, she founded the Women’s Food and Tea Sellers’ Cooperative, and in 2013, she organised the Women’s Multi-Purpose Cooperative for Khartoum State. In her role as Chair of those organisations, Mahmoud has organised more than 8,000 women who depend on selling tea and other informal sector work to survive.

“The US Embassy and the American people congratulate Mahmoud, and the many courageous Sudanese women she represents, for playing such a transformative role in her society and for her continued dedication to seeking equal opportunities for women,” the statement reads.

“Tapping the full power, intellect, and potential of women is essential to addressing global challenges. Stability, peace, and prosperity depend on advancing the rights of women and girls. Research shows that investment in women’s health, education, and employment leads to greater market competitiveness and overall economic prosperity. Evidence also shows that integrating women into peace and security negotiations helps to end conflict and create more enduring peace agreements,” it concludes.