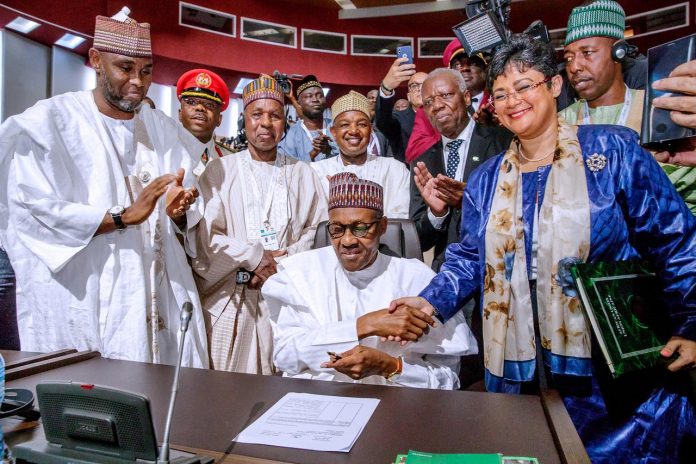 African leaders launched a continental free-trade zone on Sunday (July 7) that if successful would unite 1.3 billion people, create a $3.4 trillion economic bloc and usher in a new era of development.

At an extraordinary summit in Niamey, Niger’s capital, African leaders from the African Union used a hammer to launch four operational tools ratified by 27 countries to mark the start of the agreement following four years of talks. The agreement to form a 55-nation trade bloc was reached in March, paving the way for the summit where Ghana was announced as the host of the trade zone’s future headquarters and discussions were held on how exactly the bloc will operate.

It is hoped that the African Continental Free Trade Area (AfCFTA) – the largest since the creation of the World Trade Organization in 1994 – will help unlock Africa’s economic potential by boosting intra-regional trade, strengthening supply chains and spreading expertise.

Eritrea, the only African nation not to join, said the government supported the bloc and that it planned to hold talks with an AU delegation soon. Africa has much catching up to do: its intra-regional trade accounted for just 17% of exports in 2017 versus 59% in Asia and 69% in Europe, and Africa has missed out on the economic booms that other trade blocs have experienced in recent decades.

Economists say significant challenges remain, including poor road and rail links, large areas of unrest, excessive border bureaucracy and petty corruption that have held back growth and integration. Members have committed to eliminate tariffs on most goods, which will increase trade in the region by 15-25% in the medium term, but this would more than double if these other issues were dealt with, according to International Monetary Fund (IMF) estimates.

The IMF in a May report described the free-trade zone as a potential “economic game changer” of the kind that has boosted growth in Europe and North America, but it added a note of caution. Africa already has an alphabet soup of competing and overlapping trade zones – ECOWAS in the west, EAC in the east, SADC in the south and COMESA in the east and south.

The vast difference in countries’ economic heft is another complicating factor in negotiations. Nigeria, Egypt and South Africa account for over 50% of Africa’s cumulative GDP, while its six sovereign island nations represent about 1%.

The summit also saw the launch of a digital payments system for the zone and instruments that will govern rules of origin and tariff concessions, as well as monitor and seek to eliminate non-tariff obstacles to trade, the African Union said.