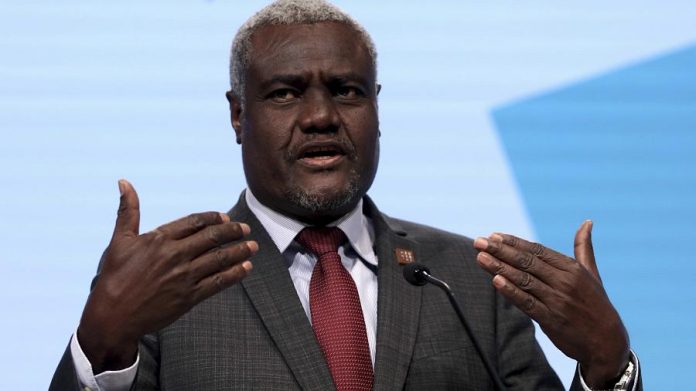 The African Union (AU), condemned the attack in the Sinai Peninsula on Saturday that killed 11 Egyptian soldiers.

According to reports, the attack was directed at a water pumping facility in Egypt. The Islamic State (IS) claimed responsibility for the attack on Sunday in which about five security personnel sustained severe injuries.

In a tweet, AU Commission chairperson Moussa Faki Mahamat condemned “in the strongest terms the terrorist attack in Sinai”.

AU Chairperson Moussa Faki tweeted, “The @_AfricanUnion condemns the terrorist attack in #Sinai that resulted in the death of 11 soldiers in the strongest terms. Our sincere condolences to the bereaved families, in full solidarity with President @AlsisiOfficial, the Govt & the people of the Arab Republic of #Egypt.”

President Abdel Fattah el-Sissi mourned the death of the troops in a Facebook post to continue fighting the rebels and “uprooting terrorism.”

The military gave no further details on the attack’s precise location. Still, two northern Sinai residents told Associated Press the attack took place in the town of Qantara in the province of Ismailia, which stretches eastwards from the Suez Canal.

The ambush was one of the deadliest attacks against Egyptian security forces.

Recall that last week, suspected militants blew up a natural gas pipeline in northern Sinai’s town of Bir al-Abd, causing a fire outbreak, but no casualties were recorded.

Egypt has been battling armed groups affiliated with ISIS in the Sinai Peninsula, which intensified after the military overthrew the Muslim Brotherhood leader, Mohamed Morsi, the country’s first democratically-elected president, in 2012.

For more than a decade, Egypt’s Sinai Peninsula has been engulfed by an armed conflict, which peaked after the removal of late Islamist president Mohammed Morsi in 2013.

The army and police launched a national offensive against the insurgents in North Sinai in February 2018.

Official data show that over a thousand suspected militants and dozens of security personnel have been killed since the operation began.