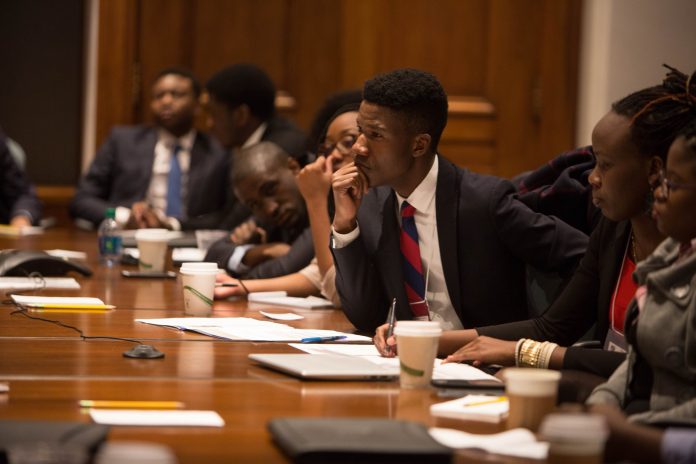 For a very long time, youths in Africa lived under the popular saying of being the leaders of tomorrow, a tomorrow that seems to forever remain elusive with the passing of each day.

However, with the passing of time and the consciousness of the need for a better life, a new wave is sweeping across the continent as the so-called “leaders of tomorrow” have risen from the slumber they were laid into by the older generation and are beginning to take charge e of their lives to be the leaders of today.

From the tech sector to agriculture, politics to administration, the youths have become more vocal in expressing themselves.

Through self-organization and the integration of technology, African youths have planned and orchestrated ideas aimed at correcting the ills in society and placing the youths at the helm of leadership.

Unlike in the past, youths are no longer complacent with just anything that is thrown their way but have stood up to fight for the future they believe in.

In recent times,  social media has contributed significantly to social movements or alliances of youths targeted at bringing their agenda and cause to the knowledge of all concerned for urgent attention.

With youths having the highest number of tech-savvy individuals in Africa, the social media platforms have served as rallying points to galvanize youths for campaigns against various grievances and injustices across the nations.

In 2021, Ghanaian youths dominated the Twitter space with various protests bad governance with hashtags like #FixtheCountry# #WeareAngry# #FixMotherGhana among others.

One of the online protests, the #FixtheCountry# trend was a call on the government of Ghana to fix issues such as power supply, reduce unnecessary taxes, and provide basic infrastructure among others.

The online protest generated  141,000 #FixtheCountry” tweets and made it to the headlines of top media outfits in the country thus was able to hold the government accountable for its deeds and advocate for better options.

As agents of change, youths across African countries are activating their ingenuity to take the front seat in matters that directly affect their existence and future as exemplified in Nigeria where the Youth Initiative for advocacy, growth, and advancement, (YIAGA Africa) alongside some other key stakeholders is organizing the Youth Vote Count Mega Concert which is aimed at ensuring that Nigerian youths get their permanent voters card to effect change in the country’s forthcoming general elections in 2023.

The musical concert is a way of using a common ground ( Music) to bring together the youths to do the right thing to set Nigeria on the path of growth and sustainable development.

Elsewhere on the continent, from Tunisia to Egypt, Senegal to Mozambique, Libya to South Sudan,  the young ones have emerged as active social agents to challenge socio-economic policies and government strategies that tend to impoverish the continent the more.

Driven by a common purpose for a good life, and away from the social ills which past governments have brought on the people like lack of job opportunities, poor economic growth, poor governance structure as well as poverty, African youths now come up with innovative ideas in tandem with 21st-century developments to make themselves socially relevant in the global village.

It was in the place of such relevance that the UNICEF and others within the G15 development group partnered with Senegalese youths and for the first time organized a dialogue session with them earlier this year for the actualization of the Priority Action Plan 2021-2023 (PAP2A) of the Senegalese Government.

At the session, the president of the Senegal Youth Consortium, Sobel Aziz Ngom said ” from now on, it is important to look at Senegalese youths as potential partners and no longer as beneficiaries.”

Also the youths through their foresight, under the umbrella of

the Senegal Youth Consortium, which works with UNICEF, is working on developing a “Label” whose aim is to offer a standard to all stakeholders to better coordinate interventions and partnerships aimed at young people in the country.

The *Label* is expected to ensure all interventions targeted at the youths make more meaningful impacts on them and are implemented based on what the youths have got to offer thus making the youths partners in the scheme of things and not just beneficiaries.

Now, more than ever before, the African youths have realized that leadership is taken and not given hence the increased vigour to take the lead and reorganize things.

Although the journey is going to be a long one for the youths of Africa to take hold and get the continent to the desired state of advancement, the journey has however begun as it is said that the journey of a thousand miles starts with a step and there are hopes and aspirations that Africa will rise again through the collective efforts of the vibrant and resourceful youths.