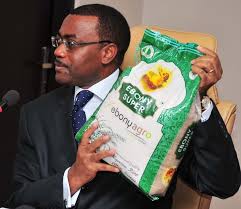 Nigeria’s Ministry of Agriculture and Rural Development has signed a N4.3 billion ($20m) facility deal with the Bank of Industry (BOI) to boost the production of cassava bread in the country.

This is part of the ministry’s measure to break the country’s dependence on food imports and encourage local farmers and the private sector to build an agricultural sector that would make Nigeria a powerhouse in food production in Africa and the global world.

“A total of 5,000 master bakers will be trained and they will be supported to acquire new baking equipment such as rotary ovens, chillers and mixers for baking this kind of very lovely cassava bread.”

“We expect that within the next 12 months, these 5,000 bakers across the country will be producing tasty cassava bread while the production of high quality cassava flour will have expanded significantly,’’ Akinwunmi explained.

The facility will also be used to upgrade capacity, serve as working loan and support bakers to acquire new machinery and equipment.

On the financing, Akinwunmi said while 50 per cent loan and 50 per cent grant to the beneficiaries would be provided through the support while “The Bank of Industry will provide working capital of N425million ($2m) as loan to the SME cassava flour processors at single digit interest rate. The facility will provide the sum of N468 million ($2.1m) as working capital loans to single digit interest rates to medium and large cassava flour millers.”

“It will also make available the sum of N2.2 billion ($10m) to support master bakers and industrial bakers as 50 per cent loans and grants for them to acquire new machinery,’’ Adesina said.

N1.05 billon ($4.8m) of the facility would also be used to upgrade the capacity of 35 existing small cassava flour mills in the country.

Speaking on the new investment, Managing Director/Chief Executive of B0I, Ms. Evelyn Oputu who co-signed the MoU commended the ministry for the initiative, expressing the bank’s commitment to support it to achieve its goal.

She called for a stronger partnership among the stakeholders to guarantee the success of the facility, adding that SMEs were the biggest players in the cassava processing industry in the country.