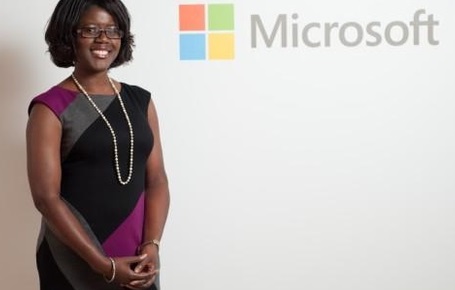 Microsoft has appointed Ghanaian ICT expert, Otema Yirenkyi as its country manager for Ghana – making her the company’s first female country manager on the African continent.

Prior to her appointment, Otema had held leading positions in the ICT sector including Director of Southern Africa at IBM. She has also been in charge of Microsoft’s investment in Ghana since September.

As the country manager, Otema will leverage on over 14 years of ICT experience to help improve access to technology, skills development opportunities and resources.

Her appointment marks Microsoft’s continuous dedication on the African continent since it began operations in Ghana 10 years ago. According to Microsoft, the West African country, which is also one of the fastest-growing economics in sub-Saharan Africa, remains one of its critical investment markets in Africa, and Otema’s appointment is an investment in Microsoft Ghana’s future growth as it as it shifts its global focus to devices and services offering.

“We are delighted to have Otema on board in this critically important role,” says Hennie Loubser, General Manager of West, East, Central Africa and Indian Ocean Islands.

“She has the track record and credentials to help grow this dynamic market, and she is deeply committed to Africa’s economic development,” Lounser added.

Speaking on her new appointment, Otema says: “This is an exciting time when the country is rapidly transforming, both economically and socially …. I hope to inspire a culture of innovation driven by technology and I am excited to be leading Microsoft’s era of expansion in Ghana.”

She noted that Ghana “have seen tremendous growth in broadband availability and internet penetration in Ghana, as well as the introduction of newer devices such as tablets and Smartphones, which have fundamentally changed how consumers experience and use technology.”

“Once African entrepreneurs have increased access, affordable technologies and the ability to monetise innovative ideas, they will create solutions that solve many of the economic and social challenges confronting Africa,” Otema added.

According to the International Telecommunications Union (ITU), Ghana’s current mobile penetration rate is at an estimated 112 percent, after the country hit the 100 percent mark at the end of 2012.

These numbers are the highest in Africa, placing Ghana 49th in the world and this has also made Ghana one of Microsoft’s critical investment markets in Africa.

Over the years and through a number of programmes, Microsoft has trained 15, 000 teachers, impacted over one million students, created over 1, 800 jobs, and supported 35 successful startups in Ghana.

Its flagship African investment and growth initiative, Microsoft 4Afrika, was launched in February this year to actively engage in Africa’s economic development, and has further entrenched the company’s commitment to Ghana and its people, ensuring that technology plays a key role in the developing economy.