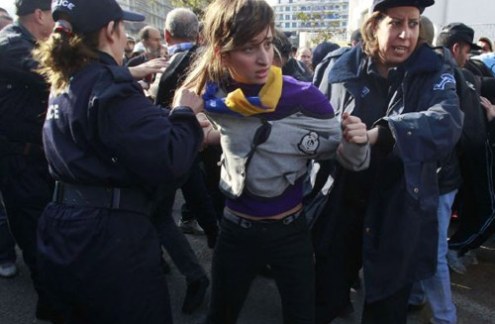 Algeria’s doomed generation: the country’s youth have lost faith in the government ever providing them with jobs or housing

In front of the Maison de la Presse in downtown Algiers, Algeria’s capital, dozens of young men and women are protesting against the government, again.

Protests are forbidden by law in this north African country and usually last only 30 minutes before the police arrive to disperse the crowds. “It’s enough! Give us back our rights!” they chant in Arabic as they stand under the sun. Others carry placards that say “A staff job is a right, not a favour! Yes to a staff job! No to the hogra!”

“Hogra means disdain, contempt, and that’s what we feel, that’s what most young people feel here when they talk about their future,” says Idriss Mekideche, 32, one of the demonstrators and spokesman of the “pre-emploi”, a group affiliated with the independent national union of civil servants (known by its French initials, SNAPAP).

In Algeria, pre-emploi (“pre-employment” in French) is the name given to temporary jobs offered by the Algerian government to young graduates. These contracts, lasting at least three years, are part of an effort to lower unemployment and to give graduates a chance to acquire skills and experience.

Across the nation, thousands of educated young people are enrolled in this programme, working in low-level, poorly-paid positions in public institutions such as schools, hospitals or courts.

When he graduated with a degree in computer management, Hocine Guonouch, 31, was offered a “pre-employment” position at a youth centre in Algiers.

“I didn’t find anything there, not a single computer in sight!” he smiles. “I asked for another job and now I work in an elementary school: I do some paper work, photocopies, I manage the cafeteria.”

His friend, Rachid Cemchaoui, a 27-year-old with a law degree, landed a temporary job in a cultural centre where he works as a doorman and night guard. “They gave me the keys, I was told, ‘You stay here, you watch who comes in and out’,” he quips.

Each and every one has a story to tell about the absurdity of a system where job titles never match the positions offered, where law, medicine, engineering and other graduates end up doing temporary low-skilled jobs with low wages, between 10,000 and 15,000 dinars per month ($125 to $200).

In total, about 900,000 pre-emplois in Algeria hope for a permanent job, ideally in their field of competence, according to the SNAPAP-affiliated group. While they wait in limbo, others have no jobs at all.

The government claims it has slashed unemployment from 30% in 2000 to 9.8% in 2013, according to the national statistics office (or ONS after its initials in French).

It boasts that it created 3.5m jobs between 1999 and 2008 through various programmes and agencies that train the jobless, support the creation of new businesses with micro-loans, and hand out temporary positions such as the pre-emploi. But many Algerians have little faith in these figures and slate the pre-emploi jobs as fake.

Despite the reduction in unemployment, 24.8% of young people under 25 were jobless in 2013, according to the national statistics office. Some experts say the actual numbers may be as high as one out of three young people without work. Algeria’s population is young, with 58% of its 38.7m people under the age of 30, according to the statistics office.

These under-30s make up 69% of the country’s unemployed. Facing discontent and a high risk of social explosion, the Algerian government is offering subsidies and grants to young people. It has also created a national agency to support youth employment and a fund to help young entrepreneurs who want to start their own companies.

“The government has just spent a lot of money to buy social peace, with no real strategy in the long run,” says Abdelouahab Fersaoui, president of Rally for Youth Action, a national social and cultural association that works with young people. “The regime has done everything to marginalise the youth, to prevent young people from taking control of their destiny.

The state considers youth a subject, a problem to handle, rather than a factor of development for the country.” Many Algerians are so desperate that their anger boils over onto the street.

Protests, sit-ins and riots transpire almost daily across the country. More than 6,500 demonstrations and 1,500 strikes took place in Algeria in 2013, many initiated by young people, according to the Algerian daily newspaper El-Watan.

Young people say they feel either ignored or scorned by their own government. They see themselves as a doomed generation with no hope for social justice.

Many complain that their future has few options: violence, exile or suicide. Some leave the country and sail over the Mediterranean to Europe. They are known as the “harragas” (“those who emigrate” in Algeria’s Arab dialect). Others are so desperate, they self-immolate.

In recent years suicides and attempted suicides by self-immolation have skyrocketed in Algeria, a copy-cat phenomenon after Muhammad Bouazizi, a young street vendor in Tunisia, set himself on fire in December 2010 and sparked the Arab spring riots. Official statistics are not available but local media listed more than a hundred self-immolations in 2013.

On March 20th, Fethi Manaa, 22, poured gas on himself in the village of Hassi Labiod in the suburbs of the north-western city of Oran. He was protesting an eviction notice from the home that he shared with eight members of his family. His brother, Aissa Manaa, 29, tried to save him but failed. “The policemen who had come to evict us just watched him burn without moving a finger,” he says. “This is not a proper state [with rule of law]. Everything works with bribes.

My brother died and it’s as if it was just a cat that died. No one followed up on this case; no one cares about him.” Mr Manaa’s immolation led to street riots in the village where families have been living in shanty houses since the country’s independence in 1962. In Hassi Labiod, as in the rest of the Algeria, the vast majority of young people still live with their parents. They say they cannot marry or raise a family for lack of decent wages and housing.

Kaddour Chouicha, bureau chief in Oran of the Algerian League for Human Rights, complains about the inequality, corruption and clientelism in the distribution of housing. “Housing is a major demand for people,” he said. “Some have castles, others have nothing. People make requests, they have no news for months or years, and then when the list of housing beneficiaries is published, there are riots.”

After visiting Algeria in 2011, Raquel Rolnik, a UN housing expert, criticised “the lack of citizens’ participation” in the allocation of housing “as well as the scope of decision-making left to the administration”.

The Algerian government has fast-tracked housing construction in a series of three five-year plans that began in 2001. The goal of the current programme is to build 2.2m housing units between 2010 and 2014. As of last March, 827,000 had been completed, according to government figures.

However, the government is struggling to keep up with Algeria’s demographic boom, the rural exodus and natural disasters (the Bab El Oued floods in 2001 or the Boumerdes earthquake in 2003). The country needs 200,000 to 250,000 new housing units per year, according to the Algerian housing ministry.