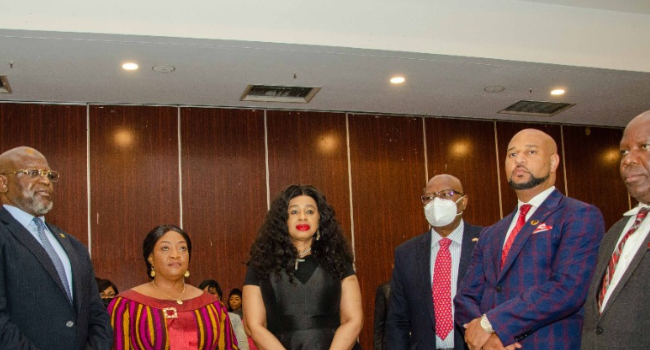 … Calls for strengthening the judiciary for the defense of democracy

Over 200 delegates from Nigeria, Ghana and Liberia converged in Nigeria’s capital city, Abuja, for the African Legislative, Legal and Good Governance Conference.

The event with the theme ‘Policy, Justice and Global Cooperation for Building back better’ held at the Sheraton Hotel & Towers Abuja and had in attendance high-ranking government officials, business leaders, legislators and senior members of the legal profession, including the Vice President of Liberia, Her Excellency Jewel Howard-Taylor; President, National Bar Association of the United States of America, Judge Carlos Moore; Director-General, Nigeria Civil Aviation Authority, Captain Musa Nuhu; Accountant General of the Federation, Idris Ahmed; Executive Vice Chairman, Nigerian Communications Commission, Prof. Umar Danbatta; among others, with the various speakers calling for a strengthened African judiciary as a key requirement for defending democracy on the continent and building confidence in the African socio-economic environment.

Her Excellency Jewel Howard-Taylor, Vice President of Liberia, in her keynote address, stated that “this forum is timely, especially as a point for monitoring how far Africa has come; even as we have begun to witness the resurgence of another old enemy – COUPS – in our Region.”

She added, “Such a Forum is critical. It allows both a backwards and frontal glance and gives a rare opportunity to reconsider suggestions and options for adoptions which will put our region on a better track.”The Vice President maintained that “as we consider ways of dealing with our perennial problems, we must heed history’s lessons.”

According to her, ” for Africa to become a vibrant, developed, unified and integrated Continent, it must put in place a framework for INNOVATION, DEVELOPMENT, and INDUSTRIALIZATION within our Borders.”

In his presentation titled ‘Banking for the common good’, the second keynote speaker, Dr Adesola Adeduntan, Chief Executive Officer of First Bank of Nigeria Limited iterated that banks can become agents of sustainable socio-economic value creation – an area where First Bank of Nigeria had a strong showing. According to Dr Adeduntan, though its agents’ banking value proposition, First Bank has stayed focused on alleviating poverty and growing the Nigerian economy while creating value for its shareholders.

The Chairman of the African Leadership Organization, Dr Ken Giami, in his remarks stated that “undoubtedly, Africa presents exciting opportunities for the Savvy. Like Aliko Dangote once famously said – Africa is the world’s best-kept secret for wealth creation.”

He also averred, “According to the World Economic Forum- at least half of the world’s fastest-growing economies have been in Africa since the year 2000; and by 2030, Africa will be home to 1.7 billion people, whose combined consumer and business spending will total $6.7 trillion.”

Dr Giami also stated that “a report by Project Syndicate confirmed that 43% of Africans will belong to the middle or upper classes by 2030, implying considerably higher demand for goods and services; with household consumptions alone expected to reach $2.5 trillion, up from $1.1 trillion in 2015, and African business-to-business spending will reach $4.2 trillion, up from $1.6 trillion in 2015.” – all signposting to the strategic relevance of the continent in the emerging global order. ‘This is a resurgent Africa, and we must strengthen our institutions to be able to manage the anticipated progress’, he added.

Highlights of the event include panel discussions, an award presentation, and a high-level networking session.

A Key partner at the conference, and as a powerful and strategic association in Washington DC, the US Judge Moore-led National Bar Association visited Nigeria on a governance and partnerships tour to harness ideas and strategic partnerships to fulfil the current United States government’s renewed quest to strengthen trade, commerce, security and health partnerships with Africa.

As a significant contributor to the government’s policies, the NBA discussed promoting Nigerian Business interests in Congress and at the national level in crucial policy discussions.