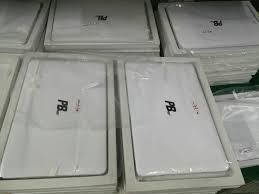 Students of the University of Buea (UB) in Cameroon have recently received laptop computers which was handed over by the Minister of Higher Education, Mr Jacques Fame Ndongo.

The 130 computers were given to the students in line with the Paul Biya-Higher Education Vision (PB-HEV) is expected to enable the students connect seamlessly with the cyberspace of the world and tap into the latest knowledge available. This will enable the students enhance their studies and achieve their desired level of success in the various fields of study. The Minister further added that the computers are of the latest technology and would be a wonderful tool in their learning.

The UB students applauded the Minister when he made his remarks that, “The Head of State has given you the best, make good use of it” and he also announced that a digital University (Université Numérique) was being conceived for Cameroon so that the Country can progress from classical university to a veritably modern one which would be able stand on equal footing alongside other technological universities around the world.

And that the gadgets were a didactic, and pedagogic tool for students to make a considerable leap in their education and become students not only of Cameroon or Africa but of the world.

In a vote of thanks delivered by a student of UB, Ntui Oben Obi Agbor, he praised President Paul Biya for promoting learning and culture and above all for having students at heart.