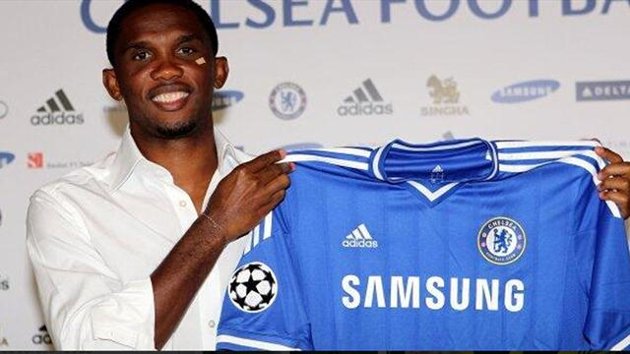 One of the world’s highest paid footballers, Samuel Eto’o, has taken a £10 million ($15.5 million) pay cut to join English Premier League giants Chelsea, after completing a move from Russian side Anzhi Makhachkala.

Eto’o rocked football headlines by joining Anzhi a few years ago on wages of about £350,000 ($542, 510) a week, as he became the stand-out earner in world football during his time with the Russian giants.

The five-time African footballer of the year’s move to Chelsea sees him reunited with former boss Jose Mourinho who was manager at Chelsea when Eto’o helped the Italian club win an historic treble in 2010. Eto’o will reportedly earn £140,000 ($214, 007) a week at Chelsea and has been signed on a single year deal.

The striker expressed his delight at sealing the move as he told reporters: ”I have had a career where I have been lucky enough to win a lot of trophies in different countries, but one of my last dreams as a professional is to come and play in England and see if I can have the same success as in my previous clubs.

”I don’t see it as a final challenge, but to have a good time, enjoy my football, and have success with this team.”