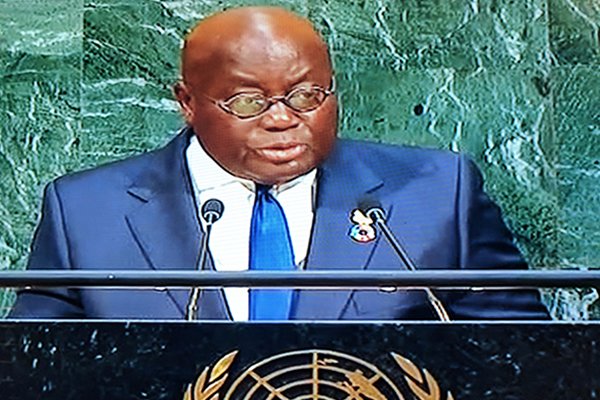 President Nana Addo Dankwa Akufo-Addo mounted the podium at the United Nations (UN) Headquarters in New York yesterday and told the world to discard any notion that the movement of Ghana and some African countries towards China would result in the recolonisation of the continent by a new power.

“This is not a uniquely Ghanaian or African phenomenon. It has not been lost on us that the developed, rich and well-established countries have been paying regular visits to China and seeking to open new economic ties and improve upon existing ones,” he noted.

Addressing the 73rd UN General Assembly meeting, the President opined that Ghana, like many countries in Africa, was forging relations with China to make arrangements to help address infrastructure deficit back home.

“We in Ghana must build roads, bridges, railways, ports, schools and hospitals and we must create jobs to keep our young people engaged,” he said.

However, he noted that the development trajectory the nation had been in for many decades was not working.

“We are trying a different one, and we would appreciate the support and goodwill of the world, especially in helping to stem the huge flow of illicit funds from the continent. We in Ghana are determined to pull our country out of poverty and into prosperity,” he stated, stressing: “We do not think that a nation needs to remain poor or become poor for others to become prosperous. We believe that there is room and there are enough resources on this planet for us all to be prosperous.”

This year’s meeting is on the general theme: “Making the United Nations relevant to all people: Global leadership and shared responsibilities for peaceful, equitable and sustainable societies”.

Taking a trip down memory lane, President Akufo-Addo recalled that it was at the turn of the 20th century that China’s first railways were built by Western companies, financed by Western loans to a nearly bankrupt Qing Dynasty, and it was under those circumstances that a certain strategic port called Hong Kong was leased for 99 years.

Today, he said, the former victim of Western Railways imperialism was lending billions to countries throughout Asia, Africa and Europe to construct not only railroads but also highways, ports, power plants and other infrastructure and many businesses.

“It is in everybody’s interest that we, who are counted amongst the poor of the world, make a rapid transformation from poverty to prosperity,” President Akufo-Addo said.

“We are determined in Ghana, and, increasingly, in more and more parts of Africa, to chart our own paths to prosperity and pay our own way in the world. We are no longer interested in being a burden on others.

“We will shoulder our own responsibilities and build societies and nations that will be attractive to our youth. We have the necessary sense of enterprise, creativity, innovation and hard work to engineer this transition, hence our vision of a Ghana Beyond Aid; indeed, of an Africa Beyond Aid,” he told the gathering.

The President called on the global community to create a modern UN fit for the purpose of the time.

“Today’s world is different from that of yesterday and it is important for all to accept that the UN needs to change to suit contemporary needs,” he said.

President Akufo-Addo pointed out that a trade war was being stoked between the two largest economies of the world and the consequences would affect those who had no say, including small countries like Ghana.

As Co-Chair of the Group of Eminent Leaders on the UN Sustainable Development Goals, the President also gave an account of the group’s work so far towards the achievement of the SDGs.

He told the world leaders that Ghana had embraced the SDGs and integrated the 17 ambitious goals into its national vision and budget.

“We intend that Ghana will, in July 2019, take its turn to present our Voluntary National Review during the ECOSOC High-Level Political Forum and we will share our successes and challenges, as well as opportunities for new and continuing partnerships,” he told the global body.

He said 55 per cent of the work of the Security Council last year had to do with Africa and, unfortunately, that was related mainly to peacekeeping and poverty-related issues.

“We no longer want to be the place that requires peacekeepers and poverty-fighting NGOs, no matter how noble their motives. ECOWAS and our continental body, the AU, are making systematic efforts, despite significant handicaps, to bring peace and stability to the entire continent, and sooner rather than later, they will succeed,” he assured the gathering.

The President’s overarching statement also centred on the gains his country had made so far in the areas of education, health and the protection of human rights.

“We know we must get our population educated and trained and we are certain about it. We must address our infrastructural deficit. The traditional methods of tackling this problem will not provide the answer. We are looking for new ways to resolve it,” he stated.

President Akufo-Addo extended Ghana’s heartfelt gratitude to the United Nations Secretariat, led by the Secretary-General, António Guterres, and the world community for the outpouring of grief and condolences that Ghana received on the passing of Kofi Annan.

He said Mr Annan’s passionate and profound belief in the United Nations, as well as his certainty that a better organised and stronger UN would make the world a better place, was an ideal that should not be allowed to die.