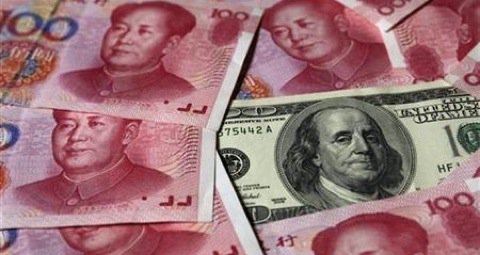 A number of African central banks are applying to the Chinese Central Bank for currency swaps, with Zimbabwe and Ghana already using the RMB as part of their reserve currency. Nigeria could also shift more of its foreign reserves into Chinese yuan from dollars as the RMB gains greater traction in global trade.

In March this year Zimbabwe joined a growing list of countries in Africa and the world using the Chinese currency, yuan, also known as remnibi (RMB), as one of its official currencies after its central bank added the RMB, the Japanese yen, the Australia dollar and the Indian rupee to the existing basket of currencies.

Zimbabwe abandoned its currency in 2009 when it was rendered worthless by excessive inflation. Since then, it has been using a basket of currencies dominated by the US dollar.

In announcing the decision to adopt the yuan and other currencies, the then Reserve Bank of Zimbabwe acting governor, Charity Dhliwayo, said that the southern African country’s trade and investment with China, India, Japan and Australia “had grown appreciably.”

China is Zimbabwe’s third largest trading partner after South Africa and the European Union, and until recently was the biggest buyer of its tobacco. In 2013, trade between China and Zimbabwe amounted to $1.1 billion.

Gift Mugano, a trade expert and executive director at the Nelson Mandela Metropolitan University’s Africa Economic Development Strategies, told Africa Renewal that the addition of the RMB to the basket of currencies would only consolidate Zimbabwe’s bilateral relations with China rather than boost trade, and help China’s quest to make its currency popular.

He added that RMB was not expected to address liquidity challenges as enunciated by the Reserve Bank of Zimbabwe in its January 2014 monetary policy because the level of trade between the two countries had not yet reached a level where enough critical mass could be built to flood RMBs into its market and Africa at large.

“Very interestingly, currency issues are so psychologically influenced, economic agents may not be comfortable to just accept one currency overnight when they were used to the US dollar. This is a complex matrix which the RMB will face in Africa,” Mugano said.

South Africa is Zimbabwe’s biggest trading partner, accounting for at least 40% of its exports and 60% of imports, he said, but despite this, the rand, the South African currency, has failed to dislodge the dollar as the dominant currency because of its volatility.

Wang Yi, a commercial consular with the Chinese embassy in Harare offered a different opinion on the prospects for acceptance of the RMB in Zimbabwe. In an interview with Africa Renewal, he said the adoption of the Chinese currency by Harare would positively influence investments from China to Zimbabwe, which amounted to about $600 million last year.

“It’s an option that will increase trade between the two countries, as well as lower the cost of doing business. Chinese businesses have welcomed this action but its success also depends on how local companies embrace it,” he said.

With a new report from the International Comparison Program, a World Bank-affiliated global statistical initiative, suggesting that this year China could depose the US as the world’s largest economy, Wang said many more countries will use the RMB to avoid foreign exchange losses when trading with China.

Zinanayi Steve Zhao, the deputy chairman of the newly-launched Chinese Federation of Zimbabwe, a lobby group for Chinese companies in Zimbabwe, said while the use of the RMB was still minimal, it would be a convenient trading tool for the Chinese.

Zhao told Africa Renewal that the RMB was a strong currency that is used by many countries in Asia for daily business transactions. “China has only recently come into Africa. The RMB would need time. The more trade there is, the more popular it will be.”

In 2012, the deputy governor of the People’s Bank of China, Li Dongrong, told a business forum in Beijing that China would promote the RMB for settlement and investments with Africa as the demand for the currency was increasing at a time when the continent’s economy was expanding.

A number of countries in Africa, among them the Bank of Ghana, are using the RMB as part of their settlement and reserve currency.

Early this year, the Nigerian central bank reportedly announced that it planned to shift more of its foreign reserves into yuan from dollars as the RMB gains greater traction in global trade. About 85% of Nigeria’s reserves are held in US dollars.

In March last year, the South African Reserve Bank signed an agreement with the People’s Bank of China to invest in China’s bond market.

Mauritius is another one of the countries where a growing demand for the Chinese currency has been reported. And while the Bank of Zambia has not yet included the RMB in its reserves, it has pledged to increase its use for trade settlements with China.

During his visit to China in August last year, Kenyan President Uhuru Kenyatta promised to host an RMB clearing house.

As Sino-Africa ties continues to outperform, a number of African central banks are applying to the Chinese Central Bank for currency swaps, which is the exchange of a loan in one currency for another and the placing of a share of their reserves in the RMB.

China has remained Africa’s largest trade partner since 2009. Total trade between China and Africa reached $210.2 billion in 2013, up 5.9 % from the previous year, according to the latest data from the China Chamber of International Commerce.

Mugano said the global economic crisis motivated China’s move to internationalise the RMB. Since then, Beijing has encouraged the use of its currency in international trade, swap arrangements between central banks, bank deposits and bond trades.

Mugano noted that the main obstacles to the further internationalisation of the Chinese currency included the lack of exchange rate flexibility and limited access to capital markets.

This, he said, would constrain the RMB as a widely used vehicle currency like the US dollar, which plays a unique role in the world of international finance – as the world’s reserve currency, used to settle most international transactions.

“Most global central banks hold their reserves in US dollar. In addition, many smaller countries choose either to peg their currency’s value to that of the dollar or forgo having their own currency, choosing to use the dollar instead as is the case in Zimbabwe. This contributes to the dollar’s status as the world’s most important currency,” said Mugano.

According to Swift RMB Tracker, the RMB is already being transferred over Swift by more than 1,000 banks in 85 countries.

Swift, or Society for Worldwide Interbank Financial Telecommunication, is a global transfer system used by companies for financial transactions.

Recent data by Swift shows that the growth in the use of the RMB in traditional trade finance has propelled the RMB to the second most used currency in the market.

China’s rapidly increasing trade with Africa provides fertile ground and demand for crossborder RMB settlements. While its use is still limited, the currency is gradually penetrating the African market.