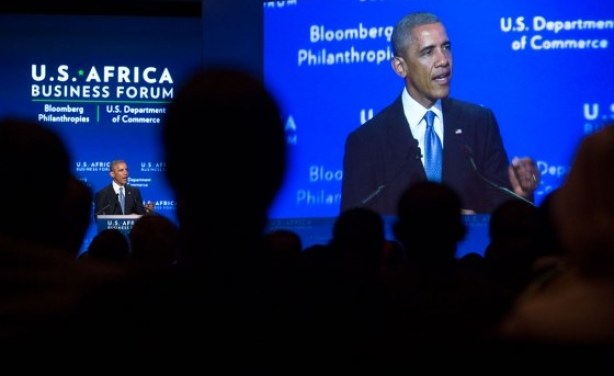 Washington, DC — The Africa Leaders Summit, held in Washington in early August, marked a welcome and important turning point as trade and investment became a top priority in US-African relations. At the same time, this development has placed the US and the EU on a collision course as it concerns trade with Africa.

From patronage to partnership

The transition in US-Africa relations began with the passage of the African Growth and Opportunity Act (AGOA) in 2000. AGOA, which reduced US tariffs to zero on 6,400 products for 40 countries in Sub-Saharan Africa, was important for introducing trade, light manufacturing and private sector-led investment as a stimulus for economic development. No longer would the US rely solely on traditional development assistance in its partnership with African nations.

While the administration of George W. Bush did dramatically ramp up the US aid relationship with Africa by funding the President’s Emergency Program for AIDS Relief, first at US$15 bn and subsequently increased to US$48 bn, it was a legitimate and important response to a dire health crisis on the continent. The reality is that this type of aid response is not likely to occur again, even with the Ebola crisis posing such a threat in West Africa.

In addition to extending the life of AGOA from 2008 to 2015, the Bush Administration took other steps to move away from traditional development assistance as the primary US connection to Africa, principally through the creation of the Millennium Challenge Corporation (MCC). Not only was the MCC a vehicle for making large scale investments, via grants, in African nations, it did so according to a rigorous set of governance criteria. The ease of doing business and the role of the private sector became important indicators for determining the allocation of MCC grants.

Obama and the private sector

When Barack Obama became president in January 2009, the transition in US-African relations was well underway. The financial crisis of 2008-2009 helped to ensure that the days of robust aid budgets were a relic of another era. Equally important, however, were the dramatic improvements in governance and economic growth taking hold across the continent. Foreign direct investment and the role of Africa’s private sector were increasingly becoming the engines of long-term sustainable growth, job creation and the key to integration into the global economy. In fact, in 2007, foreign direct investment exceeded official development assistance (ODA) for the first time, according to the African Economic Outlook. Combined with remittances and portfolio investments, private sector flows today are nearly three times greater than ODA.[1] The Obama Africa policy, although belated in its roll out, has accelerated the transition in US-African relations initiated by the passage of AGOA.

In 2009 at the L’Aquila G-8 meeting, Obama launched Feed the Future to address the global food crisis, especially in Africa, with a US$3.7 bn commitment. Three years later, the Administration brought the private sector into the programme through the New Alliance for Food Security and Nutrition. At the August Summit, it was announced that more than US$10 bn will be invested by private sector companies in agricultural activities, and more than half of this investment is coming from African-based companies.

Power Africa, whose goal is to bring a reliable source of electricity to more than 60 million homes and businesses, is a second signature Obama initiative in Africa. The private sector features prominently in this as well. According to USAID, there has been a ratio of nearly 4:1 in the leveraging of funds, as there has been more than US$26 bn in private sector financing compared with US$7 bn from the US government.

Even with the Young Africa Leaders Initiative, which attracted more than 50,000 applications for 500 fellowship opportunities in leadership training at US universities, the private sector has been an important partner to the US government.

Trade Africa is another administration programme designed to deepen commercial ties between the US and Africa. While it has not yet been successful in negotiating a trade and investment agreement with the East African Community (EAC), the programme will restructure the three regional trade hubs into trade and investment hubs. In addition to helping African companies access the US market under AGOA, the hubs will now assist American companies to capture opportunities in African markets. In addition, the Commerce Department will double its presence in Africa.

In short, the Obama administration has done more than any other administration to advance US commercial objectives on the continent, although there is still much to do. The reality, however, is that American companies are slowly waking up to the African opportunity.

More than any other issue, Obama used the August Summit to focus on promoting trade and investment in Africa. On 5 August, more than 300 CEOs from the US and Africa participated in a day long business forum hosted by Commerce Secretary Penny Pritzker and former New York Mayor, Michael Bloomberg. Not only did Obama participate in the forum but US$33 bn worth of investments were announced.

Equally as important, trade and investment was one of three sessions of the official Summit on 6 August, along with peace and regional security and governing for the next generation.

Throughout the Summit, the renewal of AGOA was a constant topic of conversation, with African leaders stressing the importance of the legislation. The Administration also conveyed its commitment to work with Congress for a “long term” extension of AGOA as well as an expansion of AGOA’s product coverage, an improvement in the rules of origin and an updating of the eligibility criteria. During the Summit week, there were countless side events that focused on the upside of investing in Africa.

The African, EU, US conundrum

In the wake of the Africa Leaders Summit there was a sense among many participants that a new era in US-African relations was genuinely possible. Nevertheless, the EU trade policy toward Africa could be a major obstacle to this new era achieving its full potential, given that AGOA and the Economic Partnership Agreements (EPAs) of the EU are working at cross purposes.

AGOA, for example, is a non-reciprocal preference programme that is using trade to promote economic development. The EPAs, in contrast, are free trade agreements that African countries were required to sign by 1st October 2014 or face the loss of preferential access to the EU. Where the US is trying to gain market access in Africa through a number of mutually beneficial initiatives and AGOA, the EU is essentially trying to dominate the market through preferential access and most favoured nation agreements. The two approaches could not be more divergent.

Moreover, while the EPAs guarantee EU companies access to those African countries that sign on, they have serious negative consequences for the continent. For example, what the EU refers to as the “SADC EPA Group” is, in reality, the five members of the Southern African Customs Union (SACU – South Africa, Botswana, Namibia, Lesotho and Swaziland) plus Mozambique. Not only is the nomenclature misleading, the EU has succeeded in dividing the Southern African Development Community (SADC), which has a history of collective decision-making dating back to 1980.

The division of SADC has regional implications as the SACU plus one group has no idea of the terms on which the other eight SADC members will initial EPAs, or whether they will do so at all. For SADC, which is working to integration with the East African Community and the Common Market for Eastern and Southern Africa (COMESA) through tripartite cooperation, the EPAs are a significant hurdle not only to the vital goal of regional economic integration, but the development agenda more broadly. After all, the COMESA-EAC-SADC Tripartite Free Trade Area, expected to be launched in 2015, could benefit half of the African Union’s member countries overall, with a combined population of 600 million people and an integrated domestic product of almost US$1 trillion.[2]

The EPAs are also likely to complicate the prospect for AGOA’s renewal. Some members of Congress are already questioning why the US should extend non-reciprocal benefits to African countries which are simultaneously agreeing to free trade agreements with the EU. There is no question that the EPAs represent a challenge to AGOA, which has led to the creation, directly and indirectly, of more than one million jobs across the continent.

Over the next two years the Obama Administration will work to deepen its legacy in Africa through its private sector-led initiatives. Extending AGOA in a timely manner, well before its expiration date of 30th September 2015, will be critical to this.

The EU will continue to move forward to extend its free market arrangements throughout Africa. This may be good for EU companies but it will undermine efforts by US companies to establish a presence in Africa. It also works against efforts by African companies and traders to increase regional trade and investment.

If there was any shortcoming of the Africa Leaders Summit it was the silence of the US and its African partners on this issue. The distinguished Oxford economist, Paul Collier, in his 2007 book, ‘The Bottom Billion’, argues that Africa needs “one simple scheme” for trade with the global economy, with generous rules of origin, pan-African coverage and a long-term phase out in order to ensure that poverty is reduced and African producers enter new export markets.[3] As the US and EU work to create the world’s largest free trade area through the Transatlantic Trade and Investment Partnership (TTIP), both sides would be well served to also harmonise their trade relationship with Africa. There would be no down side, especially as it concerns Africa’s continued growth and development.

Witney Schneidman is a Nonresident Fellow at the Brookings Institution and Senior International Policy Advisor for Africa at Covington & Burling LLP. He served as Deputy Assistant Secretary of State for Africa under President Clinton.This article was published in GREAT insights Volume 3, Issue 9 (October/November 2014).