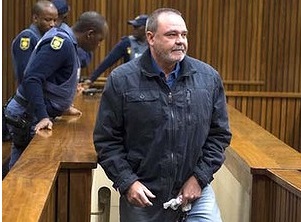 A South African judge has sentenced 20 members of the Afrikaner white supremacist group Boeremag after being found guilty last year of high treason and plotting to kill Nelson Mandela, among other charges.

The state media reported that Judge Eben Jordaan handed the sentences out on Tuesday to end the decade-long trial. The sentences ranged from five to 35 years in the country’s first post-apartheid treason trial after members of Boeremag, or white farmer force, were found guilty last year of plotting to overthrow the country’s government in the late 1990s and early 2000.  The leader of the group and four members of its bomb squad were given some of the longest sentences, having been convicted of culpable homicide and conspiring to murder Nelson Mandela.The members planted a bomb on a road Mandela was scheduled to take for a visit to a school in Limpopo Province, but failed when the anti-apartheid leader changed plans to take a helicopter to the school.

According to South African media reports, the Boermag planned to exploit the destablisation the assassination would unleash to then stage a coup and recreate a whites-only Afrikaaner state.

The group, which includes former engineers, medical doctors and military officers, also claimed responsibility for a series of bombs that killed a woman and caused damage throughout the South African township of Soweto in 2002.

This was one of South Africa’s longest running trials and it was one of the most expensive costing the country abou $3.6mn, according to the non-governmental group, Legal Aid.