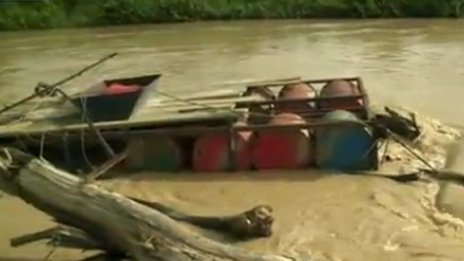 They were detained in overnight raids in the country’s Central region where they were operating small barges to dredge the bed of the River Offin.

More than 4,500 Chinese nationals have been repatriated this year after a series of swoops on illegal goldmines.

Officials says since the clampdown began, some illegal miners have been going out at night to avoid detection.

The authorities say the illegal mining pollutes the rivers and destroys the environment.

Illegal miners use makeshift barges to dredge mud from river beds which is then sifted for gold.

The BBC’s Sammy Darko in the capital, Accra, says illegal miners also mine in the forest leaving behind huge holes and cutting down trees.

The holes collect with water and chemicals like mercury used to sieve through the mud for gold drain into rivers.

Our reporter says officers set fire to the illegal miners’ equipment during the raid near the mining town of Dunkwa-on-Offin.

Officers also fired in the air to warn off any other illegal miner who might have been working, but did not engage in a shoot-out, he says.

Police said if the 43 Chinese and three Indians who were detained did not have the correct paperwork they would be deported.