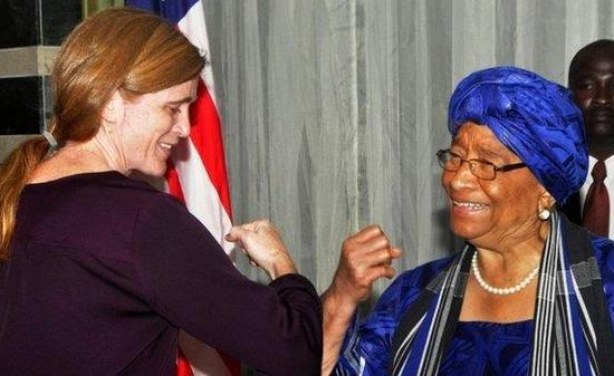 U.S. Ambassador to the United Nations, Samantha Power, who arrived in Liberia yesterday for high level talks about the Ebola pandemic, has said that positive results are beginning to emerge as the response efforts from the United States and other international community partners against the Ebola virus begin to take root.

Ambassador Power said these tangible results are also coming forth as a result of the robust mechanisms and strategies employed by the government of President Ellen Johnson Sirleaf and citizens are now aware of the situation around them and are responding positively.

Speaking at a joint press conference held along with President Ellen Johnson Sirleaf in the foyer of the Ministry of Foreign Affairs after a closed door meeting, Ambassador Power said that President Barack Obama had asked her to come to the worst hit countries to show solidarity and assure the people that they are not alone.

Ambassador Power arrived in Monrovia on Tuesday, as part of a tour of Guinea, Sierra Leone and Liberia, to demonstrate U.S. support for their efforts to combat the spread of the disease and to draw attention to the need for increased support from the international community.

She held talks with President Sirleaf and other high ranking Liberian government officials. Ambassador Power also discussed international efforts to combat Ebola with the USAID-led Disaster Assistance Response Team, which is overseeing the U.S. overall response to the health emergency and with representatives from the U.S. Centers for Disease Control and Prevention, the Department of Defense, UN Mission for Ebola Emergency Response (UNMEER) and the United Nations Mission in Liberia (UNMIL).

At the press conference, she indicated that the US has put its military and experts from the Center for Disease Control on the ground in Liberia and are now assembling their response efforts which will soon go full swing.

The US diplomat said with all of the processes now in place, the three countries are now on track to eradicate the virus from the region, indicating that the coordination of the response process is now being efficient unlike from the onset.

Giving an example of the robust coordination that is presently in place, the US Ambassador said that while it would take more than five days to get the result of tests of blood samples in places like Gbarnga, Bong County, it now take less than five hours.

This is, however, being made easier by the presence of mobile labs in and around the country. She further noted that the 17 Ebola Treatment Units that the US is constructing will be located in all parts of the country; some of which will be as large as 100 beds as well as smaller ones that will be community-centered.

These logistical and technical gaps could be contributing factors to the wide and further spread of the virus from the onset, as international response was very slow in coming. She said that the US is mobilizing more technical, human and financial resources in addition to what it has given already, when and where the need arises.

The US government, early last month, ramped up its assistance with the announcement of a 3,000-strong U.S. military team to West Africa “to combat and contain” what was then being referred to as an “extraordinarily serious epidemic with over US$400,000, 000.00.

The assistance is now seeing the supply of medical and logistical support to already overwhelmed local health care systems and increase the number of beds needed to isolate and treat victims of the Ebola crisis.

President Sirleaf welcomed and lauded Ambassador Power, who she said has been very instrumental in rallying for help for the response exercises in Liberia.

She thanked the US for its leadership role in the fight, something she said should continue till the virus is kicked out of the country also urging the US diplomat to continue to advocate for three affected countries.

Meanwhile, Ambassador Power’s comments about progress in the fight is worth welcoming though much is yet to be reported of what may be considered as the gradual decline of Ebola virus infection in Liberia by the international media known for its robust reportage from the onset of the crisis.

As the virus raged about Liberia few weeks back, the international media, including the British Broadcasting Corporation, Cable News Network and other were vigilant on reporting the damages on the ground, but much is yet to be seen from them as news of drastic decline in infection cases emerge.

The ETUs are visually empty according to reports, but reports are also emerging that there is actually no reduction in cases but people are now afraid to take their loved ones to the ETUs for fear of being cremated.

Her comments also come amidst numerous reports that there will be over 90,000 will die in the coming months, while others have said that they expect to see ten thousand new infection cases in coming weeks.