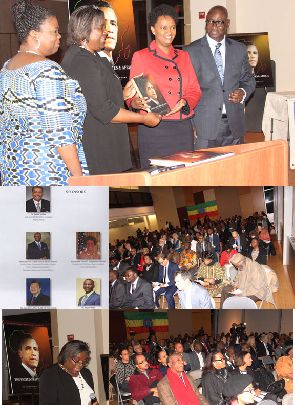 AMIP News, a Washington DC Based Media Group in collaboration with The Africa Society launched The United States and Africa Relations, a comprehensive and creative compilation, and review of US-Africa engagement. US Assistant Secretary for African Affairs, Ambassador Linda Thomas-Greenfield launched the book after her keynote address. Several members of the African Diplomatic Corps attended the event held at the Embassy of Ethiopia on International Drive, Northwest Washington.
The Edusei Foundation, which has a track record of supporting developmental initiatives, provided partial funding for the publication, along side other sponsors.

This fourth publication is based on the 4 Pillars of the United States’ strategy toward engagement with sub-Saharan Africa that was signed and issued by President Obama in June 2012 – Strengthen Democratic Institutions; Spur Economic Growth, Trade and Investment; Advance Peace and Security; and Promote Opportunity and Development.

Using both human and national interest stories, it highlights key US-Africa initiatives and partnerships, includes important presidential and governmental statements, speeches, White House Fact Sheets, historic photographs, and follows the trajectory of bilateral and multilateral relations wherever it leads. The book is an exceptional addition to international relations literature and will preserve history and promote future relations.

The Edusei Foundation facilitates youth development primarily in the United States and Ghana. The Foundation, which was founded by Dr. Kwame Bawuah Edusei a retired Diplomat and his family, seeks to improve knowledge, behavior, and health. In collaboration with other non-governmental organizations, they empower women and the Youth.