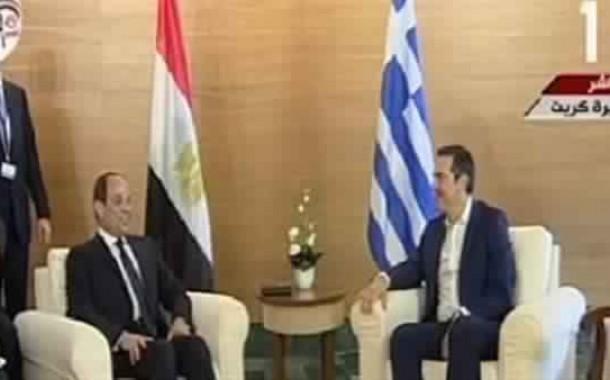 Egyptian President Abdel-Fattah El-Sisi discussed economic ties and tourism and energy cooperation with Greek Prime Minister Alexis Tsipras during talks in Crete on Wednesday, his spokesman said in a statement.
El-Sisi is visiting the Greek island for the sixth round of a tripartite cooperation summit including Egypt, Greece and Cyprus.

During the meeting, the two leaders discussed means to boost bilateral relations between their countries, especially in tourism, investment and energy, spokesman Bassam Rady said.

El-Sisi and Tsipras also tackled counter-terrorism efforts and moves to curb illegal migration, as well other regional developments, including the Israeli-Palestinian peace process, he added.

The duo expressed keenness to ensure the speedy implementation of the deals and memorandums of understanding they had signed, whether at the bilateral level or as part of the tripartite cooperation mechanism with Cyprus.

The tripartite summit was first held in Cairo in 2014, with the latest round held in Nicosia, Cyprus in November 2017.

El-Sisi’s spokesman said on Tuesday that the summit aims to capitalise on the outcomes of the past five tripartite meetings, to evaluate development in cooperation between the three states, and to assess progress on ongoing projects.

The gathering also aims look at means to boost political coordination between the three countries to combat threats in the Middle East and the Mediterranean region.