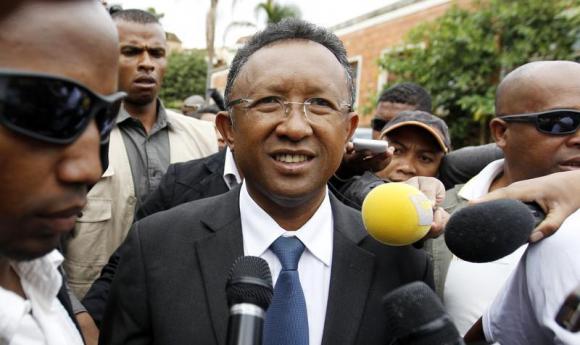 Former finance minister Hery Rajaonarimampianina won Madagascar’s first presidential election since a coup in 2009 but his closest rival said the vote was rigged, raising concerns the island could remain mired in political turmoil.

The electoral commission said on Friday that Rajaonarimampianina, the candidate backed by outgoing President Andry Rajoelina who spearheaded the coup nearly five years ago, won 53.5 percent of the December 20 vote.

He beat Jean Louis Robinson, who ended up with 46.5 percent and has demanded a recount. Robinson’s camp has filed almost 300 complaints to the electoral court, which has to rule on the commission’s provisional result by January 19.

Celebrations were muted in the capital, Antananarivo, where Rajaonarimampianina had struggled to win support in the first round.

“I urge the Malagasy people to await the final result in complete serenity,” Rajaonarimampianina told reporters.

Asked about the vote fraud allegations, he said: “It’s (Robinson) who says that and not the people.”

Robinson stayed away from the results declaration.

“We have said all along there was massive electoral fraud across Madagascar,” said Elyse Razaka who helped run Robinson’s campaign. “Robinson won’t order people to take to the streets. But it is different if there is a spontaneous movement.”

The poll is meant to end a crisis that has driven out investors, cut aid flows and sharply slowed the economy.

But a protracted dispute over the outcome would be likely to add fuel to the Indian Ocean island’s already volatile political mix and delay restoring the external budget support needed to drive public spending and boost anemic growth.

“The president-elect needs to be careful because there is a real risk of instability,” said student Dina Faralahy. “The next administration will be fragile because it is hardly representative of the population if you look at turnout.”

Just over half of the 7.9 million registered voters cast a ballot in the second round, the electoral commission said, reflecting a broad distrust of politicians that has deepened along with poverty levels in one of Africa’s poorest states.

Madagascar also voted in a legislative poll on December 20.

“I don’t think the electoral court will change anything,” said taxi driver Faniry Ravelomanana. “We have to turn a new page and await the results of the legislative elections.”

Rajaonarimampianina’s narrow margin of victory suggests there is all to play for in the parliamentary vote, raising the possibility of a French-style “cohabitation” in which the president and parliamentary majority come from different political camps.