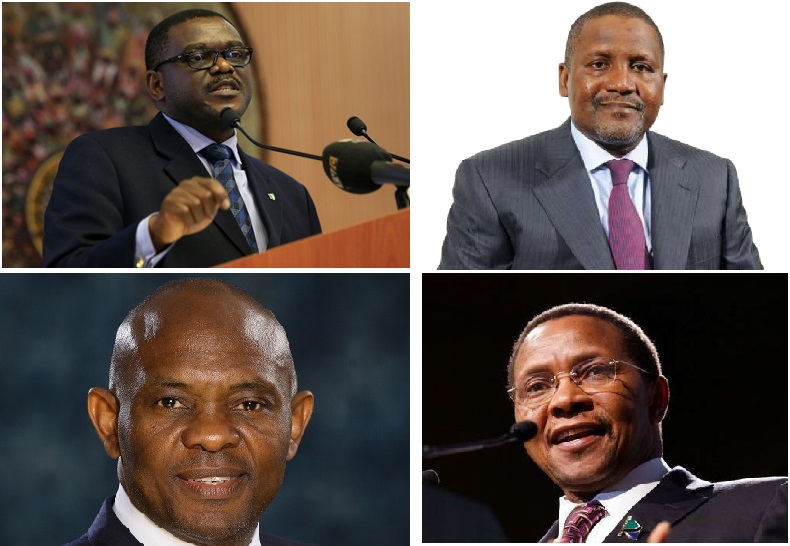 Is a renowned name in the business circle in Nigeria and outside Nigeria. He is the richest living black man in the world.

Early Life
Aliko Dangote was born in Kano, Northern Nigeria State on 10th of April, 1957 into a wealthy Hausa – Muslim family. His mother was related to the legendary hausa businessman Alhassan Dantata, and his mother was the granddaughter of Dantata. He attended the AlAzhar University in Cairo, Egypt and studied Business.

Business Career and Achievement
After Aliko Dangote finished his university education he travelled back to Nigeria and started working with his uncle Sanusi Abdulkabir Dantata who later gave him a business loan of five hundred thousand naira when he was just 21yrs old. Aliko Dangote started his company Dangote Groups, which was originally a small trading firm founded in 1977 and which  has now grown into a multi –trillion naira conglomerate which operates in countries like Ghana, Togo, Nigeria and Benin.

The group has been involve in a diversified form of business and has a manufacturing investment with high turnover. Dangote Group also has manufacturing investment with high turnover. Dangote Group also invested in importing fish and also owns three big fishing trawlers chartered for fishing with a 5,000MT capacity. Dangote Groups also imports 400,000 metric tonnes of sugar annually before investing into establishing their own sugar refining company and then they are major suppliers of the products to the manufacturers  of Coca–cola, Pepsi and Seven- Up in Nigeria before  they  started refining their own sugar. They also import over 200,000MT of rice annually just as the company has investment also importing cements, fertilizer and building materials. Dangote Groups is also into exportation of cottons, cashew nuts, cocoa, ginger, gum Arabic and seasame seed to several countries. The group acquired Nigeria Textile Mills Plc, which it acquired and produces over 120,000 metres of finished textiles daily.

The group taste for expansion and the zeal to make the goods readily available for the masses and its customers, Dangote Groups now started a sugar refinery at Apapa Port, Lagos which is the largest in Africa and its size is the third largest in the world with the annual capacity of 700,000 tonnes of refined sugar annually, it has another sugar mill at Hadeja in Jigawa state with production capacity of 100,000 tonnes. The Group also has a salt factory at Apapa and Calabar, a polypropylene bagging factory which produces over 600 trailers for distribution and packaging for export and ease transport to the port for export.

Dangote Groups has investment in the transport and a vehicle leasing unit with over 100 fully air –conditioned commuter buses and also invested in real estate with luxury flats and high rise complexes in ikoyi, Victoria Island, Abuja,  Kaduna and Kano. Dangote is a known philanthropist, he played a major role in the funding of Obasanjo re – election campaign in 2003, to which he contributed over N 200 million naira (US$2M). He gave N50 million naira (US$ 0.5M) to the national mosque under the aegis of friend of Obasanjo and Atiku. He also contributed N200 million to the National Library.

Marital Life
Aliko Dangote is married with wives and children.

His Excellency President Jakaya Mrisho Kikwete was first elected to the Fourth President of the United Republic of Tanzania on 14 December 2005. Recently on 31 October, 2010 he was re-elected for the second term.

Born on 7 October 1950, President Kikwete is a graduate of economics from the University of Dar es Salaam. At the university, he was a student leader and active participant in African liberation politics and youth movements. He later sharpened his leadership skills in the military, where he rose to the rank of Lieutenant-Colonel before retiring from the army in 1992 to concentrate on politics.

In his more than 30 years of public service, President Kikwete served in different party, military and government positions. He joined the Cabinet in 1988 and he held several ministerial portfolios including Minister for Finance, Minister for Water, Energy and Mineral Resources and Minister for Foreign Affairs and International Cooperation. He was the longest serving Foreign Minister in the history of Tanzania after serving that position for a ten year tenure.

During his tenure in the Ministry of Foreign Affairs, he led Tanzania’s efforts to bring about peace in the Great Lakes region, particularly in Burundi and the Democratic Republic of Congo (DRC). As Chairman of East African Community’s Council of Ministers, he played a pivotal role in moving forward the process of regional integration in East Africa, particularly the delicate negotiations of establishing a Customs Union between Tanzania, Kenya and Uganda. He also Co-chaired the Helsinki Process on Globalization and Democracy with the Foreign Minister of Finland.

In 2007, President Kikwete was elected Chairman of the SADC Organ on Security, Defense and Politics, where he was deeply involved in the search for peaceful solutions to political crises in the Southern Africa region, including a political crisis in Zimbabwe and Lesotho.

President Kikwete was brought into politics and mentored by the founding father of Tanzania, Mwalimu Julius Nyerere. For his administration, President Kikwete has set out an ambitious agenda for faster and sustained economic growth in Tanzania.

On 31 January 2008, President Kikwete was elected Chairman of the African Union Assembly of Heads of States and Government, where he took a proactive role in resolution of conflicts in the Republic of Kenya and the Democratic Republic of Congo. He also advanced to greater heights the relations between the AU and the UN, EU and International Community at large.

He has completed his Chairmanship of the East African Community and it was during his tenure that the EAC signed and ratified the Protocol on the Common Market. He left negotiations on the Monetary Union at an advanced stage.

A visionary entrepreneur and philanthropist. Born, raised and educated in Africa, Mr. Elemelu has been responsible for creating businesses across the continent, in sectors critical to Africa’s economic development.

He serves as chairman of Heirs Holdings Limited, chairman of affiliated company, Transcorp, Nigeria’s largest listed conglomerate, and is the creator of the Tony Elumelu Foundation, dedicated to catalysing entrepreneurship across Africa.

In his early career, Mr. Elumelu turned the financially distressed Standard Trust Bank into a top-five financial services player in Nigeria. In 2005 he led the largest merger in the banking sector in sub-Saharan Africa, acquiring United Bank for Africa –UBA today operates in 19 Africa countries, as well as New York, London and Paris.

In 2010, he founded Heirs Holdings Limited, an African investment holding company with investments in financial services, power, oil and gas, agribusiness, real estate and hospitality. In the same year he established The Tony Elumelu Foundation, an Africa-based and funded philanthropy, dedicated to the promotion of entrepreneurship in Africa.

Mr. Elumelu is the author and leading proponent of the philosophy  “Africapitalism,” which advocates the private sector’s commitment to Africa’s development through long-term investment in strategic sectors of the economy that drive economic prosperity and social wealth.

In 2003, the Federal Government of Nigeria conferred the national honour of Member of the Federal Republic (M.F.R.) on Mr Elumelu. In 2012 he was awarded the prestigious National Honour of; Commander of the Order of the Niger (C.O.N.) for his service in promoting private enterprise.  In 2013, Mr. Elumelu received the Leadership Award in Business and Philanthropy from the Africa-America Institute Awards. He was also named African Business Icon at the 2013 African Business Awards.

Mr. Elumelu presently serves as a member of the USAID’s Private Capital Group for Africa Partners Forum. He sits on the Nigerian President’s Agricultural Transformation Implementation Council and serves as Co-Chair of the Aspen Institute Dialogue Series on Global Food Security. He played a leading role in the formation of the National Competitiveness Council of Nigeria and now serves as its vice chairman. He chairs the Ministerial Committee to establish world-class hospitals and diagnostic centres across Nigeria, at the invitation of the Federal Government.

Professor C.O. Onyebuchi Chukwu is an Afikpo indigene born April 22, 1962. He was the Minister of Health of the Federal Republic of Nigeria until his resignation in October 2014.

Professor Onyebuchi Chukwu has had a distinguished career in academia, medicine, administration, government and public service. His career highlights include:

He continued to excel. He won the 2nd Prize in the 8th Baxter Health Care/Africa Health Essay Competition (1990) (Title of Essay: ‘Financing Health Through Cost-Recovery’); He was an International Scholar of the American Academic of Orthopaedic Surgery 2003 (one of four surgeons selected worldwide; the second Nigerian to achieve this distinction).

In service to his Fatherland, Prof. Onyebuchi Chukwu has also given his best in various managerial and administrative positions held:

In 2007, he was appointed a Professor of Orthopaedic Surgery, Ebonyi State University Abakaliki; the Deputy Provost, College of Health Sciences, Ebonyi State University, Abakaliki (4th November, 2008 – Date) and a Visiting Professor of Surgery, University of Nigeria Enugu Campus (with effect from 6th April 2010). He was appointed the Honourable Minister of Health of the Federal Republic of Nigeria in April 2010.

During his tenure as Chief Medical Director of the Ebonyi State University Teaching Hospital (2003 – 2008), the hospital witnessed phenomenal growth in personnel, physical structures, utilities, clinical services, the number of clinical departments accredited for internship and residency training, and the number of staff who underwent in-service training. The management team, with the cooperation of staff, raised the hospital to a level of excellence that earned it the reputation as ‘the most functional teaching hospital in Nigeria’ and made it a major centre for undergraduate and postgraduate medical training in the country.

The distinguished professor is not found wanting in the areas of community and social service. He served as president of Rotary Club of Abakaliki South, Captain of Abakaliki Golf Club and Assistant-Governor Rotary International, 2008/2009; 2010/2011, District 9140 Zone 22.

Prof. Onyebuchi Chukwu holds the membership of many national and international professional bodies. He has also attended and participated in several academic and professional conferences and workshops.

As Minister of Health, he championed the approval of the National Strategic Health Development Plan for the health sector by the Federal Executive Council of Nigeria and the signing of the International Health Partnership Plus (IHP+) Compact securing partners commitment to the implementation of the plan. He is the current Chairman of the Assembly of ECOWAS Health Ministers; Board member, Partnership for Maternal, Newborn and Child Health; First Vice President of the 64th World Health Assembly and the current Chairman of the Country Coordinating Mechanism (CCM) Nigeria of the Global Fund for AIDS, Tuberculosis and Malaria. He was the Chairman of the 60th Session of the Regional Committee for Africa of the World Health Organization.