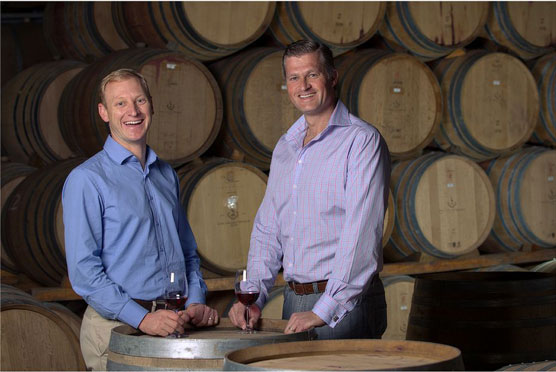 If Paul Clüver didn’t go into the family business he would have, “probably done something boring like finance or banking.” Wine, he says, is a lot more exciting.

As managing director of Paul Cluver Wines, a family-owned/family-run wine business located in the cool-climate Elgin Valley approximately 45 miles southeast of Cape Town, South Africa, Clüver is carrying on a family tradition of adding fun and sustainability into the business model to produce a successful product.

With a focus on creating wines expressive of the terrior – particularly sauvignon blanc, pinot noir, chardonnay and riesling – the winery forms part of a larger holistic farming business called De Rust Estate, which includes apple and pear orchards, musical concerts in the forest, a locally renowned restaurant and a Hereford stud.

“Our business is divided into two significantly different areas: apples and pears, which is the production of a basic commodity, and the premium wine production, which is completely different,” Clüver says. He joined Young Presidents’ Organization in 2013. Aside from the obvious – one crop is eaten while the other consumed in a glass – Clüver explains the other differences between the two.

“Your purchasing decision when it comes to an apple is not based on origin, but when you buy a bottle of wine the first thing you ask is, ‘What variety, where did it come from and who made it?’ Based on your answers I’ll tell you if you made a good decision or not.”

Clüver laughs, but then explains that things weren’t always this way, that once upon a time, small, local farmers markets were the norm and the consumer knew which city, if not which farm their produce came from.

“A hundred years ago in South Africa, if you were a small fruit farmer, it would be easy to make a lot of money, but there has been a tremendous consolidation in the production of food, which is a result of the consolidation of purchasing power, mainly in regards to supermarkets,” he says. “It’s no longer the scenario of some farmer sitting on a farm and looking at his crops grow or working the vineyards himself.”

This gradual disappearance of locality is in part, what precipitated Paul Cluver Winery.

“Our wine production started in the mid-80s when Marlborough, New Zealand, Oregon and Washington State became famous and the whole term ‘cool climate wines’ came about. In South Africa people started asking, ‘Where can we produce these wines?’ Elgin was identified as a potentially fantastic cool climate area.”

Potential became actuality and Elgin is now one of the premier wine growing regions in South Africa, and the Clüvers – pioneers of the industry.

From the very beginning, the Clüver family understood that although business may ebb and flow, being stewards of the land and champions of their workers remains a constant.

De Rust Estate works closely with Cape Nature Conservation, an organization driven to establish a successful conservation economy. The Clüvers were the first owners of private land in South Africa’s Western Province to participate in its stewardship program, committing more than 1,200 hectares of land to conservation in perpetuity.

Additionally, the family started a program called the Adult Based Education System to help Estate employees who have not completed school achieve their qualifications, and they were instrumental in initiating The Green Mountain Eco Route, an organization focused on developing tourism linked to biodiversity values in the area around the Groenland Mountain.

The organization’s catchphrase, “blending wine and biodiversity” is a testament to just how integral wine production is to sustaining the region. The De Rust Estate estate itself forms part of the UNESCO world heritage site, the Kogelberg Biosphere, and with more than 1,600 different plant species, it is one of the world’s richest sites for plant diversity.

The Clüvers have also introduced a handful of eclectic activities on their property to help bring awareness to the region. De Rust is home to one the top-10 mountain biking trails in South Africa, a sport that Clüver says is one the fastest-growing in the country and as such, attracts enthusiasts from all over the world.

A towering eucalyptus forest on the property encircles an intimate amphitheater hewn entirely from farm timber. The theater hosts live musical performances specifically chosen to match the natural acoustics. A recent partnership with Thembalitsha Foundation – an organization that aims to restore hope to the people of South Africa through the provision of healthcare, education and training – sees 100 percent of the profits from any concert or event the organization manages donated directly to their locally operated projects.

“We started doing the concerts 10 years ago and they have been exceptionally well received,” says Clüver. “They give people an opportunity to get out of the city and do something fun.”

The more one reads about Paul Cluver Wines, the more one feels the word “wine” belies the incredibly diverse enterprises the family is engaged in.

“We’re trying to create a sustainable enterprise for the next generation. We think of ourselves as the guardians of the business rather than the owners.”