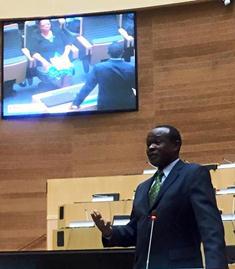 H.E Mr. Erastus Mwencha, Deputy Chairperson of the African Union Commission (AUC) led the commission in celebrating the Black History Month.
In commemorating the annual event, H.E Mr. Mwencha called on Africans and the Africans- Americans to reflect and recognize their common heritage, shared values and philosophies that have served them well in addressing challenges such as colonialism, instability and other realities.
The Deputy Chairperson also called on Africans to define themselves and to have the courage to identify progressive authentic principles and norms that forms the foundation of the Black race.
While appreciating the struggle for equality, democracy, justice, and human rights, H.E Mr. Mwencha called on the Africans and the Africans- Americans to emulate the non-violence nature demonstrated by icons such as Martin Luther King Jr. during the civil rights movement in America in the mid-1950s. He challenged victims of injustice to seek recourse through peaceful protests and non-violent or extremist means.
H.E Mr. Mwencha joined in watching a movie organized by the Embassy of Democratic Republic of Congo in collaboration with US Mission to African Union to mark the Black History Month, at the Nelson Mandela Plenary Hall, African Union Commission Headquarters, Addis Ababa, Ethiopia.