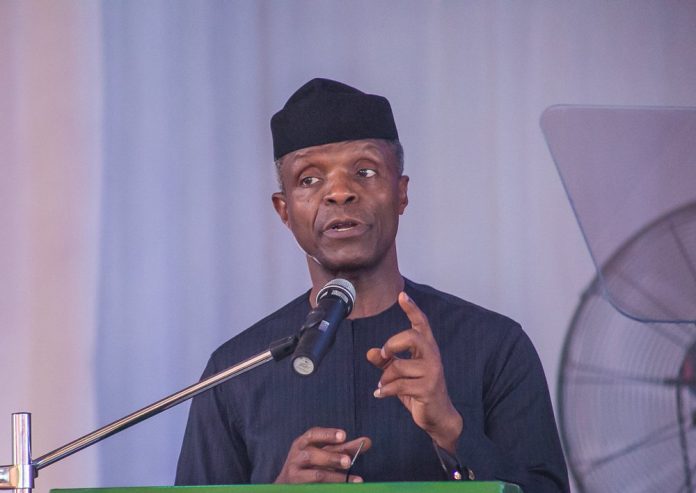 Osinbajo disclosed this while addressing participants at the 9th Presidential Quarterly Business Forum held at the State House Banquet Hall on Monday in Abuja.

The focus of the forum was on Job creation.

The vice president said that infrastructure development was crucial in economic growth and job creation.

He commended the commitment of the participants to expanding the work being done by the Industrial Training Fund (ITF) and the Nigeria Employers’ Consultative Association (NECA) on skills acquisition.

According to him, there is the need to put emphasis on skill training and placing large numbers of young people in the workplace.

“It will also be important that we commit to constituting sector skills councils and encourage the development of these councils for various sectors, especially in sectors we have identified as being of priority for job creation.

“I am convinced that we can crack the jobs problem and we are in the right direction.

“ We have spent so far in two budgets, N1.7 trillion in capital investment – that is the largest in the history of the country despite earning 60 per cent less; we are doing far more with far less resources,’’ he said.

Osinbajo said that the Federal Government was also looking at solving the power problem.

He said that the Federal Government would review the previous power privatisation and how to enhance capacity of business people by boosting power supply.

The vice president said that Job creation had been a priority of President Muhammadu led administration as the surest way of creating jobs was by enabling the private sector to do business easily.

“Opportunities are created in agriculture and the agro-allied industry, services, manufacturing, among others.

“But we realised that that would not solve the immediate problems of thousands of graduates who have no jobs or the millions who are at the bottom of the trading pyramid barely eking out a living.

“This, we believed created a compelling argument for direct intervention by government,’’ he said.

In an overview of the economy, Minister of Budget and National Planning, Sen. Udo Udoma, said that under the Social Investment Programme, N500 billion was allocated annually to take of the poor and the vulnerable in four clusters.

He listed the clusters as Government Enterprise and Empowerment Programme (GEEP) in which 308,737 loans had been successfully disbursed to 4,084 cooperatives across 36 states and FCT.

Others are Conditional Cash Transfer in which 297,973 persons were supported with cash transfers of ₦5,000 each in 217 LGAs across 20 States and 2,530 community facilitators trained.

The Home Grown School Feeding Programme in which 8.56 million school children were fed in 46,000 schools across 24 States and 90,670 catering staff engaged.

Afolabi Imoukhuede, the Senior Special Assistant (SSA) to the President on Job Creation and Youth Employment, Office of the Vice President, in a presentation, said that Nigeria’s youthful population was an advantage.

“We strongly believe that by tapping into our youthful demographic edge through large-scale and appropriate skills development, we will improve the prospects of economic growth and social inclusion,’’ he said.

The Minister of Labour and Employment, Sen. Chris Ngige, said that the ministry was synergising with the private sector to bridge the skill gap in the country.

The forum was attended by private sector operators and officials from relevant government agencies.